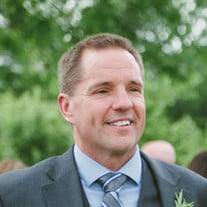 The world is a little less bright after John Jeffrey Osinski, Sr., 60, of Upper Arlington, Ohio passed away too soon on Dec. 22, 2021. Known for his friendliness and selflessness, John will live on through the positive impact he had on all those that he encountered. John (also known as "Jeff" or "Johnny O.") was born in Toledo, Ohio in 1961 as the ninth of 13 children. John is preceded in death by his parents, John David and Dolores (Lewandowski), and his brother, Christopher ("Chip"). Those left to carry on his legacy include his siblings: David Osinski, Diane Domanski, Cyndi Raczko, Carol Jacks, Janine Williams, Mary Demecs, Steve Osinski, Regina Osinski, Tom Osinski, Elizabeth Morgan and Julianne Ksiazek; his son and daughter-in-law: John Jeffrey Osinski, Jr. and Ashley Osinski; his grandchildren: Adelaide, Crosby and Leo; and countless other nieces, nephews, relatives and friends. John graduated from Toledo St. Francis de Sales High School in 1979, where he ran cross country and track. After time at Ohio State, he enlisted in and served as a military policeman for the Ohio Army National Guard. In 1984, he began a 37-year career at UPS. Driving a package car, John enjoyed his daily interactions with the people he met along his different routes, always taking time to say hello and brighten a day. As one of 13 children, John learned early on to appreciate all of life's blessings, and he found peace in the simplicity of nature throughout his life, spending endless hours running and biking in the Toledo Metroparks. John's positive relationships with others are his lasting and most important legacy, none more significant than his relationships as a father and grandfather. John and John Jr. were best friends, and nothing showcased John's selflessness more than his devotion to providing for his son. John carried this same devotion for his grandchildren. After recently retiring following a Leukemia diagnosis, he moved two blocks away from his grandchildren so he could play an even greater role in their lives. John's family is hosting a Celebration of Life on Saturday, Jan. 15, 2022, at the Ward Pavilion in Wildwood Preserve Metropark. John's son and siblings will receive family and friends from 2-5 pm, followed immediately thereafter by a time for all friends and family to share their memories of John. In lieu of flowers, contributions may be made in his memory to Metroparks Toledo. Family has entrusted SCHOEDINGER NORTHWEST with arrangements. Please visit www.schoedinger.com to sign the online guestbook or to share a special memory.

The world is a little less bright after John Jeffrey Osinski, Sr., 60, of Upper Arlington, Ohio passed away too soon on Dec. 22, 2021. Known for his friendliness and selflessness, John will live on through the positive impact he had on all those... View Obituary & Service Information

The family of John Osinski created this Life Tributes page to make it easy to share your memories.

The world is a little less bright after John Jeffrey Osinski,...

Send flowers to the Osinski family.