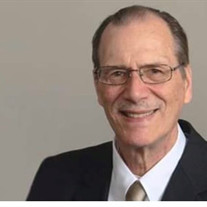 John Eric Morral, age 81, passed away unexpectedly on Monday, December 21, 2020. He was born in Kokomo, Indiana on August 3, 1939 to Rolf and Lillie Morral. He was also preceded in death by his sister Sandra Pinkham. John received his undergraduate and Master of Science degrees in Metallurgical Engineering from The Ohio State University, graduating in 1965. He completed his doctoral work at the Massachusetts Institute of Technology, receiving his Ph.D. in 1969. He joined the University of Connecticut in 1971 and became a full professor and chair of his department. Within a week of his retirement in 2003, he was recruited to be chair of OSU's Material Science and Engineering Department. He retired from OSU in 2012, becoming an emeritus professor. John continued his professional work as Editor-in-Chief of the Journal of Phase Equilibria and Diffusion. John was the recipient of numerous awards for his many scientific contributions. He was named a Fellow of ASM International in 1995; named a Distinguished Alumnus of the OSU College of Engineering in 1995; elected a member of the Connecticut Academy of Science and Engineering in 2003; honored with a TMS Honorary Symposium in 2004; received an American Competitiveness and Innovation Fellow Award, NSF Division of Materials Research in 2009; received a Distinguished Scientist/Engineer Award, TMS Division of Materials Processing and Manufacturing in 2012; and awarded the J. Willard Gibbs Phase Equilibria Award in 2017. A colleague wrote, "It is with great sadness that I have been made aware of the passing of dear John, a man of integrity, dedication, and with an accomplished scientific contribution to the materials field. John will be greatly missed in the scientific community." He was a man of many talents, including the little lyrics he liked to compose. A sample is the following: Better than fun In a great vacation. Better than love In a wild flirtation. Better than peace In a meditation. Is science unveiled. In a new notation J.E. Morral 9/26/2016 John was a kind, generous man who was a great listener and was liked by everyone he met. He was a loving and cherished member of his family. He had many interests. He learned to play the violin in his forties and the ukulele in his eighties .He loved animals and had an active interest in gardening, cooking, theater, art, poetry, literature and sports, but his first love was definitely science. John will be deeply missed by his loving wife of 42 years Dorothy "Dot" Morral; children Peter (Bronwin) Morral, Ingrid Morral (Patrick Quesenberry), Kenneth Cammarato, and Cheryl (Jerry) Wolters; grandchildren Natalie and William Morral; siblings Frank (Linda) Morral, Ann (Matthew) Sandor, Harriet (Jim) Perkins; brother-in-law Galen Pinkham; and numerous nieces and nephews. In lieu of flowers memorial contributions may be made to a charity of your choice. Memorial Serivce at 3:00pm on Friday, July 30, 2021 at SCHOEDINGER NORTHWEST, 1740 Zollinger Road, Columbus, Ohio 43221. Please visit www.schoedinger.com to share memories and condolences.

John Eric Morral, age 81, passed away unexpectedly on Monday, December 21, 2020. He was born in Kokomo, Indiana on August 3, 1939 to Rolf and Lillie Morral. He was also preceded in death by his sister Sandra Pinkham. John received his undergraduate... View Obituary & Service Information

The family of John Eric Morral created this Life Tributes page to make it easy to share your memories.

Send flowers to the Morral family.