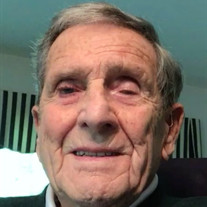 John Lima, 89, of Columbus, passed away peacefully on September 27, 2020. He was born in Duquoin, IL, on March 31, 1931 to the late Joseph and Lena (Aleo) Lima. In addition to his parents, John was preceded in death by his daughter, Shelley Walton; and his brothers, Phillip and Sam Lima. John is survived by his wife Margaret Lima; son, Mark Lima (Dawn Packard); grandchildren, Joseph (Mackenzie) Lima, John (Elizabeth) Lima, Tony Lima, and Mathew Lima; his brother Joseph (Marge) Lima; and Cynthia Lima. John graduated from DuQuoin High School. Shortly after high school he enlisted in the United States Navy where he became a Navy pilot and learned to fly the Corsair and Skyraider aircraft. After flight school, John spent 7 years in the Navy and then many years in the reserves. During his time in the military he was deployed twice to fly during the Korean War and achieved the rank of Lieutenant. Following his time in the Navy, John graduated from the University of California Berkley with a bachelor's degree in engineering. He worked on both the East and West Coast, before settling in Cleveland Ohio. It was in Cleveland that he would meet the love of his life Margaret to whom he was married for 48 years. John worked for Wemco, a mine engineering company, and would later become the President and CEO of Hartman Fabco, a machinery manufacturing company based out of Lansing, Michigan. John enjoyed spending time with his family and friends, golfing and flying his own Piper Arrow for business and pleasure. He also was an avid reader and enjoyed investing. A private funeral service will be held. Those not in attendance will be able to watch the service on the Schoedinger website under John's webpage. In lieu of flowers, a donation in John's name may be made to a church or charity of your choice. This webcast will take place on Saturday, October 03, 2020 at 1:55 PM. Watch webcast for John Lima: https://webcasts.lifetributes.com/1093348

John Lima, 89, of Columbus, passed away peacefully on September 27, 2020. He was born in Duquoin, IL, on March 31, 1931 to the late Joseph and Lena (Aleo) Lima. In addition to his parents, John was preceded in death by his daughter, Shelley... View Obituary & Service Information

The family of John Lima created this Life Tributes page to make it easy to share your memories.

John Lima, 89, of Columbus, passed away peacefully on September...

Send flowers to the Lima family.