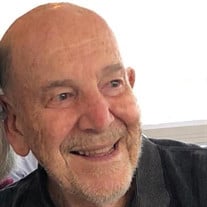 John L. Kaufman, OCDS, of Columbus, passed away November 12, 2020. John was born February 26, 1926 in Akron, Ohio. He was preceded in death by his parents John E. Kaufman and Marie C. Schreiner, and three siblings: Victor, Joseph and Grace Harris. John is survived by his present beloved wife, Mary E. Theodoras, of 24 years and adored sister Mary Alice Armbruster of Tallmadge, Ohio. John's first wife, Frances (deceased in 1991), who he shared 38 years together and had seven children: Michael (Linda) of Sparta, Michigan, Edward (Debbie) of Reynoldsburg, Theresa Adams (Bret) of Pataskala, Sharon Palmieri (Bob) of Blacklick, Joyce of Westerville, Thomas (Kim) of Johnstown, and Johnny (Mary) of Galloway. John has 20 grandchildren and 15 great-grandchildren. Mary E. has three living children: Julie (Jack) Huff of Xenia, Mary Ann (Frank) Scarpelli of Beavercreek, and James (Clara) of Lund, Sweden, and six grandchildren. After graduating from Akron's East High School, John became a lay brother in the Precious Blood order for a short time. Later he joined the U.S. Marine Corp. During World War II, he served in the South Pacific and received a Presidential Unit Citation. After military service, he earned a college degree from the University of Illinois, Champagne/Urbana. He then worked for five years on a rubber plantation in Liberia, West Africa. This was followed by years of employment with B.F. Goodrich Research and Aerospace Centers and Rockwell International where he retired. John was a tennis player, snow skier, a dedicated golfer, and a world traveler. He loved music, square dancing, reading, the theater, and playing cards. He participated in the Columbus Honor Flight and found the experience exhilarating. He loved meeting people of all ages and visiting new places. John loved his family, Mary and God. John lived his faith throughout his very full life. He was a leader and participant in several Catholic religious groups for most of his life. During John's retirement years, he volunteered for Mount Carmel Hospital's Pastoral Care for 33 years and with the Columbus Association of Performing Arts (CAPA) for 15 years. For 10 years he worked for OSU's sports and events areas. He was an active, faithful parishioner of St. Pius X Catholic Church in Reynoldsburg and for several years served on their school board and the Parish Pastoral Council. In November 2007, John was inducted in the Our Lady of Mount Carmel Discalced Carmelite Secular Order (OCDS) at the Chapel of St. Theresa's Retreat Center in Columbus, Ohio. A very special thank you to the Cherry Blossom Memory Care Caregivers whose dedication, compassion and zest for fun provided a safe, comfortable community environment in his final year. The care given to John in his final days by Capital City Hospice Service caregivers made John's final days comfortable and was a blessing. In order to maintain your safety, we request that visitation at SCHOEDINGER EAST FUNERAL HOME, 5360 Livingston Avenue, Columbus be limited to family members only and is scheduled from 8:30 am to 9:15 a.m. on Saturday, November 28, 2020. At 10:00 a.m., a Catholic Mass of Christian Burial is scheduled for the family at St. Pius X Catholic Church, Reynoldsburg with burial at Glen Rest Memorial Estates immediately following. If you wish to attend services through your computer or phone, please click into www.Schoedinger.com./JohnLKaufman/media/webcast. In lieu of flowers, donations may be made in John's name to the American Heart Association. Please visit www.Schoedinger.com. to share online condolences and memories. A Celebration of John Kaufman's life for family and friends will be scheduled at a later date.

The family of John L. Kaufman created this Life Tributes page to make it easy to share your memories.

Send flowers to the Kaufman family.