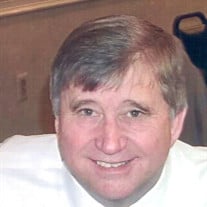 John Gerhard Karst, 65, passed away on September 27, 2021. He was born to John and Susanna (Solner) Karst on May 27, 1956 in Columbus, OH. John graduated from Gahanna Lincoln High School as part of the class of '75. Following high school, he joined his father in his masonry business. John was proud of the contributions he made to carrying on and growing his father and uncle's masonry business. Throughout his masonry contractor career, he helped to build many schools, such as St. Charles, Linden McKinley, New Albany, Gahanna, and St. Charles. He did extensive work for the Catholic Foundation, Mother Angeline McCrory Manor, as well notable residences all around the Columbus area. John was an accomplished deer hunter. He spent many hours in the woods looking for that perfect buck. In any free time, John could be found fishing, traveling, and spending time with his family, likely watching Ohio State Football. John will be fondly remembered for his pride in his work, his professional integrity, and his passion for family. His sense of humor, story-telling abilities, and generosity will be greatly missed. John is preceded in passing by his father; and his son, John G. "Johnny" Karst, Jr. Left to cherish his memory are his wife Barbara Karst (Brown); his daughter Lisa (Jacques) Karst-Flynn; his son Andrew Karst; his mother, Susanna Karst; his sisters Rosemary Crist and Mary (Steve) Stephenson; his brother, Richard (Nancy) Karst; and many loved nieces and nephews. Visitation will take place on Wednesday, October 6 at SCHOEDINGER NORTHEAST, 1051 East Johnstown Road, Gahanna, OH 43230 from 5pm-8pm. John's funeral service will take place the following morning at 10am at Peace Lutheran Church, 455 Clark State Road, Gahanna, OH 43230, with interment at Headley Cemetery, followed by a luncheon with the Karst family. A live webcast of the funeral service will be available from Peace Lutheran at this link, which will go live shortly before the service begins- (https://youtu.be/7yT5osI2vF4). The Karst family would greatly appreciate if all attendees would wear a mask to the visitation and the funeral service for everyone's continued safety. In lieu of flowers, please make a donation in John's memory to the International Myeloma Foundation or the National Wildlife Federation. International Myeloma Foundation : (https://bit.ly/2YjjJTL) National Wildlife Federation : (https://support.nwf.org/page/34045/donate/1?ea.tracking.id=WEB_BTN)

John Gerhard Karst, 65, passed away on September 27, 2021. He was born to John and Susanna (Solner) Karst on May 27, 1956 in Columbus, OH. John graduated from Gahanna Lincoln High School as part of the class of '75. Following high school, he... View Obituary & Service Information

The family of John G. Karst Sr. created this Life Tributes page to make it easy to share your memories.

Send flowers to the Karst family.