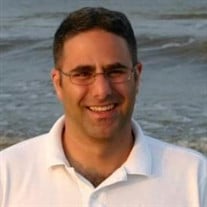 John Eric Ghiz, 47, of Dublin, OH, originally from South Charleston, WV passed away on Sunday, January 10, after succumbing to his battle with COVID-19. Eric was the son of the late John Ghiz and Amal Hannoush Jones. He leaves behind his sister, Natalie Ghiz, his partner, Angel Cinco, many Aunts, Uncles, Cousins, Step-siblings, and countless cherished friends who he considered family. He also leaves his beloved pets Dakota, Winks, and Moondance. Eric was a faithful servant who was always a part of a church or parish community. His faith journey began at Blessed Sacrament, where he served as a Eucharistic minister. Most recently, he attended St. Patrick’s of Dublin, where he served on the vestry and was an enthusiastic member of the handbell choir. Eric graduated from South Charleston High School and went on to complete his Bachelor’s degree at Duquesne University. He loved music and played multiple instruments at school and church. His other great loves included travel, especially air travel. He loved airplanes so much he took flying lessons and sometimes visited the airport just to see the planes. Despite stubbornly resisting it for years, he finally gave in and tried running, and it’s probably fair to say he only did so because he wanted to run the John Glenn Runway 5K. Throughout his lifetime, Eric collected friends in every space he occupied, including fellow musicians from SCHS Band all the way through Columbus Rings. He also had lasting bonds with those from Duquesne University, his several church families, and his workplaces. He is remembered with great fondness for his time as Postmaster of Turtle Creek Post Office. Eric treasured people and animals, and he quietly made the world better for so many. He used laughter, silliness, and joy to connect with people. Those who knew him can surely remember an example of a selfless act he performed or a sacrifice he made to make someone else’s life easier or better. He was truly adored, and his family is comforted by memories of a loving, good-hearted, and dear person. The family would like to extend their gratitude to the Ohio Health System Dublin/Riverside and The Ohio State Medical Center Richard Ross Heart Hospital for their heroic care for Eric and to the people of Ohio. Eric’s family and friends pray that everyone will adhere to the CDC guidelines, including wearing facial coverings, social distancing and getting vaccinated as soon as possible to spare others the suffering he endured in the last days of his life. Because of the pandemic, a memorial service will be held at a later time. The family humbly suggests honoring Eric’s memory with contributions in his name to the Kanawha-Charleston Humane Association at 1248 Greenbrier Street, Charleston, WV 25311 or to an animal shelter of your choice. SCHOEDINGER DUBLIN is honored to be assisting the family. Eric will truly be missed by everyone who was lucky enough to have known him.

John Eric Ghiz, 47, of Dublin, OH, originally from South Charleston, WV passed away on Sunday, January 10, after succumbing to his battle with COVID-19. Eric was the son of the late John Ghiz and Amal Hannoush Jones. He leaves behind his... View Obituary & Service Information

The family of John Eric Ghiz created this Life Tributes page to make it easy to share your memories.

Send flowers to the Ghiz family.