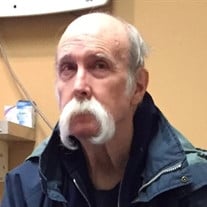 John "Chris" Eberts, U. S Army Veteran, age 72, passed away peacefully Friday, January 7th, 2022.He was born February 8th, 1949, in Columbus, OH to the late William and Alice Eberts. John is survived by his loving wife of 42 years, Patty Dell Eberts, son, William Stiver, grandchildren; Avery (Ashley Janson) Stiver, and Aidan Stiver, great grandson; Grayson Stiver, sister, Sally (Jerry) Lux, mother-in-law, Patricia Clawson; brother-in-law, Don M. Dell, and sister-in-law, Helyn Dell Marshall, along with other dear family and friends. In addition to his parents, he is preceded in death by, brother-in-law, Charles F. Dell. John was a good man, who worked very hard through his life, working for Western Electric/ AT&T/ now known as Lucent Technologies for over 30 plus years. He had a passion for riding his bicycle; it brought him so much joy. John was an avid film watcher and appreciated every category of movie. He was a bright presence in people's lives and will be missed deeply. Entrusted Arrangements to SCHOEDINGER EAST FUNERAL HOME. Please share a memory or send condolences to John's family.

The family of John Eberts created this Life Tributes page to make it easy to share your memories.

Send flowers to the Eberts family.