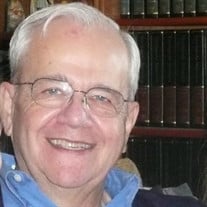 John J. "Jack" Dilenschneider, 89, passed away peacefully surrounded by the love of his family on September 22, 2021. Preceded in death by Rody, his wife of 65 years, Jack is survived, loved, and revered by his ten children and their spouses: Anne of Sioux Falls, S.D., John (Monica) of Franklin, Tenn., Charles (Jamie) of Charlotte, N.C., Joseph Justin (Ayano) of Ronan, Mont., Ted of Dublin, Ohio, Frank (Michelle) of Dublin, Ohio, Mary Condon (Tim) of Sarasota, Fla., David (Mary) of Denver, Colo., Robert (Kathy) of Saitama, Japan, and Rose Rozembajgier (Mike) of Carmel, Ind., and his adoring 24 grandchildren (and five of their spouses) and five great-grandchildren. He is also survived by his sisters Martha Doughty (H. Cort) of San Jose, Calif., and Mary Lou Shay (Robert), of Columbus, Ohio, and his brother, Robert L. (Janet), of Darien, Conn. Jack was born in Philadelphia, Pa., on November 18, 1931, to Sigmund J. and Martha Witucki Dilenschneider. He spent his childhood in Forest Hills, N.Y. attending Regis High School in Manhattan while holding a side job as a runner for Radio City Music Hall. Later, Jack graduated from Lakewood High School in Lakewood, Ohio where he played high school football, ran track, and wrote for the school paper. He graduated from the University of Notre Dame in 1953 and subsequently received a Master of English from The Ohio State University. On a blind date in April 1951, Jack instantly fell in love for life with "the most beautiful, talented and brilliant girl he had ever met," Rody Oppenheim, then a student at Saint Mary's College. They married at the Basilica of the Sacred Heart at Notre Dame on September 11, 1954. Jack's incomparable breadth of knowledge came from scholarly, professional, and artistic endeavors. After two years as an Army counterintelligence agent during the Korean War, Jack attended Northwestern University Law School where received his Juris Doctor degree in 1959. During this time, Jack worked as a milkman to support his growing family. Jack and Rody then moved to Columbus, Ohio, where Jack served three years as an assistant attorney general for the State, started a small law firm, and further supported his family by teaching English composition during evenings at The Ohio State University. Troubled by the unrest and racial tension in the South, in the summer of 1965, Jack went to Mississippi, where in Natchez, Jackson, and Vicksburg he defended citizens who were attempting to peacefully exercise their rights under the Voting Rights Act of 1965. For his work and service, Jack received a commendation from the Lawyers' Committee for Civil Rights in 1998. In 1967, he was appointed to the U.S. Bankruptcy Court and inaugurated the now-thriving Chapter 13 program. When Jack resigned from the bench in 1975, The New York Times said he was "considered one of the country's two leading authorities on personal bankruptcies." For the next two decades, Jack practiced bankruptcy law with Porter Wright Morris and Arthur, Smith and Schnacke, and Squire, Sanders and Dempsey. He also served as an advisory capacity on the Bankruptcy Code of 1978, including testifying before Congress. He taught bankruptcy law as an adjunct professor at The Ohio State University, wrote scholarly articles, and lectured extensively throughout the U.S. For 20 years, Jack wrote 12 chapters of the treatise, Collier on Bankruptcy. From 1996 through 2002, Jack served as Counsel to the Supreme Court of Ohio and, in retirement, joined Bailey Cavalieri as "of counsel." Jack was a past president of the Association of Former Bankruptcy Judges and a Fellow in the American College of Bankruptcy. With a life-long belief that with God all things are possible, Jack and Rody were active parishioners. In the early 1960s, they chaired many committees at St. Agatha Church and raised funds to build the church in Upper Arlington, Ohio. In 1967, they were founding members of The Assembly, an "above ground, underground" parish established to promote the reforms of Vatican II. Most recently, they were members of the St. Thomas More Newman Center. Jack was a past president of the Notre Dame Alumni Club of Columbus and was named the club's Notre Dame Man of the Year. A true man for all seasons, Jack collected stamps, enjoyed playing the banjo, and explored Canada while camping and canoeing with his family. His paramount interests were a respect for the liberal arts and a devotion to civil rights. He avidly studied the works of Shakespeare and of Dr. Samuel Johnson; he was a member of the Johnson Society of London. Jack and Rody attended every play at the Shakespeare Stratford Festival and the Shaw Festival for more than 40 years. They also enjoyed opera and listening to Pete Seeger, Gershwin, Bach and Mozart. In recent years, Jack wrote and published a book with his son, advised his grandchildren, and maintained a hefty Zoom schedule to keep in touch with family, college roommates, friends, and colleagues. A romantic all his life, Jack wrote a love letter to his Rody each day of the 20 months since her passing. Jack taught his family how to live, learn, and, most importantly, love well. For a man whose favorite quip was "Faked 'em out again," he was as accomplished, genuine, and kind-hearted as anyone could be. We few, we happy few, his children and family, encourage friends to celebrate Jack's life. Due to the pandemic, his visitation and Celebration of Life Mass in Columbus, Ohio, will be held in August, 2022. Jack will be interred at Cedar Grove Cemetery at the University of Notre Dame with the love of his life. In lieu of flowers, donations can be made to either the John and Rose-Marie Dilenschneider Great Books Fund at the Upper Arlington Education Foundation at 614-487-5007 ext. 1120 or www.uaeducationfoundation.com; or the Oppenheim Research Grant at Saint Mary's College at 574-284-4600 or [email protected] Arrangements entrusted to SCHOEDINGER NORTHWEST.

John J. "Jack" Dilenschneider, 89, passed away peacefully surrounded by the love of his family on September 22, 2021. Preceded in death by Rody, his wife of 65 years, Jack is survived, loved, and revered by his ten children and their spouses:... View Obituary & Service Information

The family of John J. "Jack" Dilenschneider created this Life Tributes page to make it easy to share your memories.