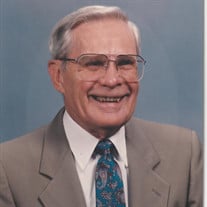 John Joseph Dickson, Sr., age 95, was carried into Heaven Monday, August 24. He was born in Columbus, Ohio on March 13, 1925 to Dorothy (Wheeler) and Wilbur John Dickson. He attended Aquinas High School and graduated in 1943. John served in World War II as a hospital corpsman from 1943-1946. He married Vivian Downs in 1947 and they had four children. He was preceded in death by his wife of 44 years, Vivian; his son, Larry, his brother and sister-in-law, Bob and Katie Dickson, brother-in-law, Hal Morse, and his daughter-in-law and granddaughter, Beth and Cassie. He is survived by his sister, Patricia Morse, his son and daughter-in-law, John and Sheila, his son Jim, his daughter and son-in-law, Beverly and Dan Noble, 7 grandchildren: Nikki (Chris), Christina, Becky (Jermaine), Jessie (Eric), Jill (Tim), Josh, and Jackie (Jason), 12 great grandchildren: Brandon (Leah), Kaitlyn (Aaron), Miles, Conner, Jeffrey, Addie, Issac, Hunter, Jacob, Emma, Theo, Ava, and 1 great-great-grandchild, Ellie, and several nieces, nephews, and cousins. John attended and graduated from a radio and electronic school in the 1940’s. He began Dickson Homes, Inc. and was a custom home builder for over 30 years and a real estate broker for over 50 years. He volunteered at Riverside Hospital in his 80’s and accumulated over 4000 hours. John was an avid golfer and continued playing in a league into his late 80’s. He also enjoyed bowling and was in a league into his early 90’s. He was a devout Catholic and a member of St. Patrick’s Church for over 45 years, and often attended with his sister, Pat, and brother, Bob. He cherished his faith and family. He will be missed by many and, especially, those he loved. Thanks goes to Mt. Carmel Hospice, and a special thanks to cousin Sharon Rehm who was a constant help and comfort to all of us. A Mass of Christian Burial will be celebrated by Father Stephen Alcott at 10:00 am at St. Patrick Church, 280 N. Grant Ave., Columbus, Ohio, 43215. Burial will follow at St. Joseph’s Cemetery. 6440 S. High St. Lockbourne, Ohio, 43137. Due to Covid-19, there will be no calling hours. Those attending mass are requested to wear masks, if able, and follow social distancing. Family requests that in lieu of flowers, contributions may be made to Little St. Margaret’s Charity at St. Patrick’s Church.

The family of John J. Dickson Sr. created this Life Tributes page to make it easy to share your memories.

Send flowers to the Dickson family.