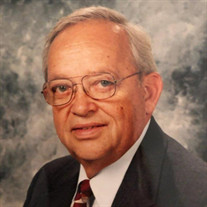 Senior Master Sergeant John Russell Alexander, 87 years young, passed away on November 29, 2020. John was born on September 3, 1933 in Providence, Rhode Island where he resided until he joined the United States Air Force at the age of 17. During his 20-year career he met Evelyn, the woman of his dreams in 1954, they were married for 64 1/2 years and had 6 children. During his tour of duty at Bien Hoa Air Force Base in Vietnam as an Air Traffic Controller, he helped to educate and take care of many young, orphaned children. He received a Bronze Star Medal for meritorious service while engaged in military operations. Upon his return to the United States, he was stationed at Lockbourne Air Force Base where he received The Air Force Commendation Medal. John is a member of the American Legion in Gahanna. His second career, of 30 years, was as a State Farm agent in Grove City Ohio, where he also resided for 38 years. John spent most of his free time gardening and enjoyed passing out his produce to friends, family, and those in need. John was a founding member of Fellowship Baptist Church Columbus, Ohio, where he served in various positions for 52 years; Superintendent of the Sunday School program, taught the Young Marrieds program, was seated on the Board of Directors, and was a Trustee/Treasurer. John was also a member of Gideon's International where he was instrumental in distributing thousands of bibles around Central Ohio. John was a father, partner, and a friend to all, proceeded in death by his Father, Bernard P. Alexander; Mother, Lydia Aldenberg; brothers Earnest, Paul (Irene), and sister Rhoda (Mort), his wife Evelyn and granddaughter Nicole Lynne. His memory will live on through his surviving family including sisters; Beth Aldenberg, Marcia (Joe); sons Russell (Martha), Dale (Tamara), Dean (Jeanne) and David (Cné): Daughters; Rebecca (James) and Deborah (Laura). Also survived by 7 grandchildren and 8 great-grandchildren. Due to COVID restrictions, there will not be public funeral arrangements. A family only graveside service will be held at the Grove City Cemetery on Grove City Road on Friday December 4, 2020. In lieu of flowers, donations can be made in John's name to Fellowship Baptist Church in Columbus, Ohio () or to Gideon's International () SCHOEDINGER DUBLIN is assisting the family with arrangements.

Senior Master Sergeant John Russell Alexander, 87 years young, passed away on November 29, 2020. John was born on September 3, 1933 in Providence, Rhode Island where he resided until he joined the United States Air Force at the age of 17. During... View Obituary & Service Information

The family of John Alexander created this Life Tributes page to make it easy to share your memories.

Send flowers to the Alexander family.