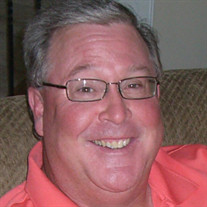 Joel Payton, 61, of Dublin, passed away on August 21, 2020. He was born in Jersey City, NJ on June 2, 1959. He was preceded in death by his parents James and Marilyn (Holland) Ciula. He spent his childhood in Elkhart, Indiana before moving to Mentor, Ohio where he played football at Mentor High School. Joel graduated from The Ohio State University with a bachelor's degree in business. During his time at Ohio State, he played fullback for the Buckeyes and set several records. Joel cherished his days at Ohio State and treasured the lifelong friendships he made there. Joel was a lifetime member of Varsity O Alumni Association and was honored as a member of the Mentor High School Sports Hall of Fame. Ohio State played another important role in Joel's life years later when he met the love of his life, Patty, at an Ohio State Football game. That chance encounter would lead to a 30-year partnership and 28 years of marriage. Although Joel cast an imposing physical shadow on the football field, off the field he was a warm and soft-spoken person with a ready smile. He was a loving and devoted husband, father, and grandfather. Joel cherished his family and friends and the memories they made will last forever. After more than 30 years, Joel retired from AGC Automotive Americas in March 2018. He was an avid golfer and played nearly every day with his friends and family. He showcased his passion by building his own clubs, using them to hit a hole in one last year. Joel held a deep love of music, enjoying everything from AC/DC to jazz. His passion for music led him to build countless speakers, amplifiers and other stereo equipment in his home workshop, which he would happily share with friends and family. Joel will forever be in the hearts of his loving wife, Patty Payton; children, Jessica (Chris) Stiel and Bryan (Lindsay) Hawkins; grandchildren, Cameron, Emmy, Riley and Connor Stiel; and his sister, Kathy Sullivan. The family will receive friends on Tuesday, August 25th, 2020 from 4pm until 7pm at the SCHOEDINGER WORTHINGTON CHAPEL, 6699 North High Street. All guests are required to wear masks at all times in the funeral home and practice safe social distancing guidelines. In lieu of flowers, donations in Joel's memory may be made to Special Olympics Ohio at This webcast will take place on Wednesday, August 26, 2020 at 10:55 AM. Watch webcast for Joel Payton: https://webcasts.lifetributes.com/1086001

Joel Payton, 61, of Dublin, passed away on August 21, 2020. He was born in Jersey City, NJ on June 2, 1959. He was preceded in death by his parents James and Marilyn (Holland) Ciula. He spent his childhood in Elkhart, Indiana before moving to... View Obituary & Service Information

The family of Joel Payton created this Life Tributes page to make it easy to share your memories.

Send flowers to the Payton family.