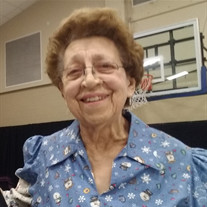 Born JoAnne White Thomas on November 2, 1928, in Grove City, to H.K. and Donna Thomas. Childhood hardships included the death of her mother, living with several different relatives and a bout with pneumonia. Graduated from Grove City High School in 1946 and married George Purtee in 1949, later having two beautiful daughters Donna Sue and Karen Lou. Worked at The Farm Bureau in Columbus, for Philco in Sandusky (soldering early televisions), for the Ceramic Society in Columbus, and retired from Columbus City Schools after 21 years as school secretary. She was a long-time member of Maize Manor United Methodist Church. After George's death she began a new life as a single Western Square and Round Dancer, belonging to Bucks and Does in Columbus and Little Brown Jug Singles in Delaware, being Council Reps and secretary and eventually President of LBJ, along with dancing everywhere she could. LBJ is where she met Mark Johnson. They started as dance partners and became steady dates, leading to 27 wonderful years of marriage. Mark and Jody danced all over the country, became dance leaders and published central Ohio's "Cues and Tips" square dance magazine for 21 years. She danced up until her 92nd birthday/Halloween party/dance at the Gillie Senior Center. Jody is preceded in death by her parents Homer and Donna Thomas; brother Donald Thomas; and her first husband George. Jody is survived by her loving husband Mark; sister Emma Jeannette Wilson; step-daughter Barb (Al) Deuble; step-grandchildren, Keith (Rachel) Lemley and Denise Lemley; daughters, Donna (Randy) Hafey and Karen (Quinn) Schwartz; grandsons, Matt (Becky) Reed, Gabe (Cris) Schwartz, Wes (Erin) Reed, Nick (Jess) Schwartz and Pete Schwartz and amazing great-grandchildren Aidan, Nadia, Quinn, Taylor, Layla, Evie and Sammie. Mom/Grandma/Great-Grandma/Jody was well-known for having quiet strength, high pain tolerance, good sense of humor and great love. Even after her Alzheimer's diagnosis she continued to dance, and was happy and sociable and funny, even if she couldn't remember your name. The way she lived should be an inspiration to all. After being lost for several years, she found her way home peacefully on November 19, 2020. Jody's family will receive friends from 1-3pm on Sunday November 22, 2020 at SCHOEDINGER NORTH, 5554 Karl Road, Columbus, where the funeral service will begin at 3pm that afternoon. In lieu of flowers please consider making a donation to the Alzheimer's research, . Guests are respectfully asked to wear a mask and attendance will be monitored to ensure safety for everyone attending. Please visit www.schoedinger.com to watch the live streamed funeral service or share a memory with her family.

The family of JoAnne Johnson created this Life Tributes page to make it easy to share your memories.