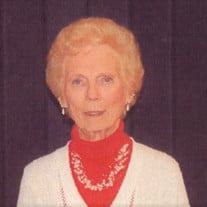 Joann Craig passed into the loving arms of her Lord Tuesday, September 14, 2021. Born in Hutsonville, IL, December 2, 1928 to Joel and Arkie (Montgomery) Moorhead, she devoted her life to her family, her home, her church, music, always making a memorable entrance, and never staying on the stage longer than she could hold the spotlight. She married the love of her life, Harry Craig, September 22, 1946 and supported him in his career, living in five states, and retiring to Robinson, IL in 1991. Following his death in 2006, she moved to Columbus, OH. Joann shared her singing talent throughout her life, from performing with her sisters and brother as a “Moorhead Merrymaker” from the time she was two, to singing solos, family trios, and in church choirs. As a speaker for the American Cancer Society while living in GA, she was interviewed by Billye Aaron (Hank's wife) on WSB-TV’s ‘Today in Georgia’ and shared the stage with Carol Channing at the regional fundraiser. As organist and pianist for Bopp Funeral Home while living in St. Louis, she was asked to play everything from the Mizzou fight song, to Scott Joplin's “Maple Leaf Rag,” to classical favorites, to the most obscure old gospel hymns imaginable, all of which she managed to pull off with ease. Throughout her long and interesting life, she was neither intimidated nor impressed by power, money, or education—and more than a little suspicious of all three. Joann approached every person she met, whether in the Georgia Governor's mansion or the aisle at Dollar Tree as equally valuable, and she reaped much love and respect as a consequence. She is predeceased by her parents, her husband, three sisters and one brother. She is survived by one sister, Rhea Glenn of Robinson, IL; her daughter, Harriet (John) McIntyre of Bexley, OH; a devoted granddaughter and her husband, Dallas Cheatham (Troy Meidinger), and one very special great-granddaughter, Nina, of Louisville, KY. Her inscription by Theodor Fontane in a photo album she gave her daughter summarizes her philosophy. “One very important thing: that wherever we go, and however we go, we hear the music of life.” In lieu of flowers, donations may be made to Reynoldsburg Baptist Church, 887 Rosehill Rd., Reynoldsburg, OH 43068 . Friends received Saturday, September 25, 1 to 3 PM at Schoedinger East. A graveside service will follow 11 am Saturday, October 16, 2021 at the New Hutsonville Cemetery, Hutsonville, IL.

Joann Craig passed into the loving arms of her Lord Tuesday, September 14, 2021. Born in Hutsonville, IL, December 2, 1928 to Joel and Arkie (Montgomery) Moorhead, she devoted her life to her family, her home, her church, music, always making... View Obituary & Service Information

The family of Joann Craig created this Life Tributes page to make it easy to share your memories.

Joann Craig passed into the loving arms of her Lord Tuesday,...

Send flowers to the Craig family.