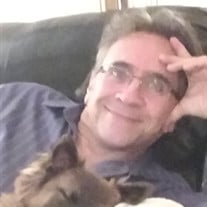 Jesse Harrison Bruton Jr. was born June 9th, 1964 in Santa Fe, New Mexico. He graduated from Aztec High School and attended San Juan Community College where he studied Computer Science before moving to Columbus, Ohio where he met his wife Janet. Jesse passed away unexpectedly on March 11th, 2021 in Columbus, Ohio. He is preceded in death by his father Jesse Harrison Bruton Sr. and brother David Bruton. Jesse had far too many accomplishments in his life to list them all, but here are a few noteworthy ones. An entrepreneur, he owned many businesses including Mr. Pc, Lasting Impression In Stone, 2 J's Distributing, and Ohio Water Quality Associates. He invented Work-Web which led to his nomination for Who's Who in America. He was also an accomplished singer and songwriter who turned down the opportunity to be a signed artist on 3 separate occasions. However, out of all of these accomplishments, his pride and joy was his family. Left to cherish his memory are his wife of 35 years, Janet Bruton; mother and best friend, Geraldine D. Bruton; children, Katrina Bennett, Angela Bruton, Aaron Bruton, Micaella Bruton-Ours, Julia Bruton, and his niece, considered as a daughter, Erin Harris-Blake; grandchildren, Kareem Attia, Joseph Coon Jr., Yusuf Attia, Brooklyn Bruton, Emma Sartor, Lucian Bruton, Benjamin Sartor, Jordan Bruton-Vigil, Jazmin Estarda-Bruton, and Henri Bruton-Ours; sisters, Joyce Bruton-Adams, Darla Bruton-Wilison and family, and Andrea Bruton-Shutlz and family; sister- and brother-in-laws Nancy and Steven Gillispie and Charles Harris; Godparents, aunt Angela Garcia and uncle Benjamin Salazar along with numerous other Aunts, Uncles, Cousins, Nieces, and Nephews. Jesse was a member of the Fredericktown Seventh Day Adventist Church. His previous workplaces include Limited Brands, The Private Industry Council, and Resource Interactive. Being the father of several strong-minded daughters, Jesse became an advocate for women's rights and equal pay. He was a very fun loving person with a witty personality. A very organized planner who loved music, gardening and animals, especially his dog "Cookie" who was always by his side. He was passionate about those who choose to serve in the military and enjoyed having morning tea with his wife Janet followed by morning coffee with his Mother. Viewing hours will be held at the Worthington SDA Church located at 385 E Dublin Granville Rd, Worthington, OH 43085 this Saturday evening, March 20, from 6:00-8:00 pm. The following morning, Sunday, March 21, a funeral service will be held in the sanctuary of the church beginning at 10:30 am. In lieu of flowers, the family are requesting donations to be made to a family fund in his honor.

The family of Jesse Harrison Bruton Jr. created this Life Tributes page to make it easy to share your memories.

Send flowers to the Bruton family.