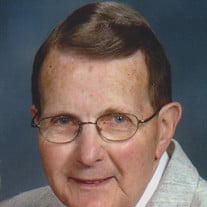 Jerry C. Dye, of Worthington, Ohio, went home to be with the Lord on December 2nd, 2021, at the age of 86. He was born in Zanesville, Ohio on August 9th, 1935, to Ralph and Mary Elizabeth Dye of McConnelsville, Ohio, and was one of five sons. Jerry attended Malta and McConnelsville High School where he was a member of the football team. Upon his graduation in 1953, he spent two years in the ROTC program at The Ohio State University before joining the Army. During his two years in the Army, he was stationed at Fort Riley, Kansas and served as a flight control operator. After his discharge, he returned to Columbus, Ohio where he worked for Eastern Airlines in Columbus, Ohio. It wasn't long, however, before he was recruited to serve once again as a flight control operator, but this time as a civilian contractor on Kwajalein Island in the Marshall Islands. He returned to the states two years later, worked a few short years for TWA, and finally built a career as a highly successful travel agent and owner of his own travel agency, University Travel Service, which sat above the old Long's Bookstore on the Ohio State campus. Aside from his relationship with Jesus Christ, nothing mattered more in this life to Jerry than his family. He was a devoted husband, father, grandfather, and brother. On September 9th, 1962, he married the love of his life, Connie Musselman, to whom he was married for 59 years. They were blessed with two wonderful children, Brent and Amy, and two beautiful granddaughters, Kimberly and Katie, who captured his heart. Some of Jerry's favorite things included studying his Bible, listening to classical music, getting into a good book, and spending time with his granddaughters. He was a master at Sudoku, rarely began the day without solving a new puzzle, and loved to share his tips and techniques with others. He was passionate about sports, especially Ohio State football, and looked forward every year to attending the Ohio High School state track meet with his three brothers, Ralph, Bruce, and Doug. For all his life, Jerry loved serving others. He attended Grace Brethren Church for 54 years where he served as a deacon, usher, greeter, and other ministries. Since his retirement in 1999, he enjoyed serving as a volunteer at Riverside Methodist Hospital. It's fair to say he never knew a stranger. He always greeted those he met with a smile and made them feel welcome no matter who they were or where he was. He touched so many lives with his kindness, gentle demeanor, and sense of humor. He will forever be remembered and missed by all who knew him. Jerry was preceded in death by his parents, Ralph and Mary Elizabeth Dye, and his brothers, David and Ralph Dye. Jerry is survived by his beloved wife of 59 years, Connie; son, Brent (Stephanie) Dye; daughter, Amy (Mykel) Pamperin; granddaughters, Kimberly and Katie Pamperin; brothers, Bruce (Kay) Dye and Douglas (Karen) Dye; brother-in-law, Ned (Lynne) Musselman; and beloved nieces and nephews. In lieu of flowers, please consider a donation to one of these important ministries that touched Jerry's life in a deeply personal way: Honor Flight Columbus, PO Box 12036, Columbus, OH 43212 www.honorflightcmh.org/donate-today Right Start Ministries, P.O. Box 437, Worthington, OH 43085 https://rightstartradio.org/paypal_donate/Donate-to-Right-Start-Ministries

Jerry C. Dye, of Worthington, Ohio, went home to be with the Lord on December 2nd, 2021, at the age of 86. He was born in Zanesville, Ohio on August 9th, 1935, to Ralph and Mary Elizabeth Dye of McConnelsville, Ohio, and was one of five sons. Jerry... View Obituary & Service Information

The family of Jerry Dye created this Life Tributes page to make it easy to share your memories.

Jerry C. Dye, of Worthington, Ohio, went home to be with the...

Send flowers to the Dye family.