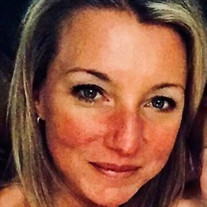 Jennifer Anne Pschesang, nee Mains, professional clipper of coupons to be hoarded and later thrown away; online shopper and online sleuth of enviable skill; possessor of an enviable sardonic wit, baker of cookies and brownies; terror behind the wheel; ruthless Trivial Pursuit player; and self-described Hot Mess, died on August 4, 2021. Jennifer, the oldest of three siblings, was born Jennifer Anne Mains on October 30, 1979, to parents Charles and Diana Mains, in Vincennes, Indiana. She grew up in Noblesville, Indiana, where she participated in the show choir and theater programs and made academics her top priority. Being "raised by teenagers" taught her a great deal about growing up, including how to drive a car at frightful speeds and ignore railroad crossing and stop signs while avoiding being pulled over, how to select and use the right swear word for any occasion, that it is NOT in fact cheaper to eat out every meal than to buy groceries, and how to work hard to make a better life for yourself and those you love, skills at which she'd excel her whole life. Jennifer loved well-behaved children relative to how enamored of her they were, loved all children (especially babies) in small doses, and loved her daughters with every breath she took and every ounce of her being, regardless of how ill-mannered, poorly behaved, or malodorous they were. She excelled at dropping f bombs, suffering no fools, and laughing at jokes, particularly the most sarcastic and macabre. She did not excel at hiding her disdain, backing out of garages, driveways, and/or parking spaces, locating her keys and other important items, or being told what to do. A voracious reader and podcast listener, she loved true crime and psychological thrillers. As an attorney who had the joy of taking two bar exams, Jennifer was practical and fair. She worked hard but also made an effort to balance her life so that she also had time to interfere in the lives of those around her as much or as little as she felt was warranted. Jennifer is survived by her better half, Andrew, who was proficient at one-upping her, particularly when it came to yard work, farming, taking care of nice things, dealing with anything involving blood or pain, and applying brute force. She will miss introducing new challenges into his life to keep him on his toes and contributing to the continued honing of his crisis intervention skills. She loved him as her soul mate and hated that she would be first to leave; his commitment to her throughout her illness until her death was bittersweet because she'd have preferred that he never suffered it. Jennifer is survived by her two spoiled daughters, Kennedy (age 13), whose art projects she loved but whose experimental projects, like her "flour balls", she did not always enjoy, and Sloane (age 11), who's sociopathic but flattering comments she soaked up like the sun but whose stashing of fake nails in every crevice could possibly have sent Jennifer to an early grave in and of itself. She loved them very much, even though one of them (and sometimes both of them) would cry on Christmas every year because they felt they had received "less than" the other (but never because they were overcome by the spirit of giving). She loved the mother-daughter traditions of baking and decorating Christmas cookies, hanging up all the "special" Christmas ornaments and watching the Harry Potter movie series; she was less fond of the annual school supply shopping excursions, though her daughters thoroughly enjoyed those trips, maybe particularly because of her suffering. Everything she did, she did for her daughters. Her love for them was unmatched. Jennifer is survived by her sister, Kristin (John) Baker, and her brother, Matthew Mains. Jennifer is also survived by an incredible number of close friends, who cannot be named for fear of missing somebody or saying too much or too little about any one of them relative to one another (much like her daughters, who will surely argue over the way they were characterized in this obit for many years to come). Jennifer wouldn't have wanted everyone to gather together to mourn her departure from this world, she'd have preferred that they do something they enjoy in her honor. So, she fully expected and hoped that all of her introverted friend and family members would elect to stay home on the day of her funeral and that those who gather together in her honor would imbibe, laugh, and rejoice in the fact that she is at peace. Arrangements entrusted to SCHOEDINGER DUBLIN, 5980 Perimeter Dr, where a visitation will take place Sunday, August 8, 2021, from 1-4pm. A Mass of Christian Burial will be held on Monday, August 9, 11:00 am at St. Brigid of Kildare, 7179 Avery Road Dublin, OH 43017, followed by interment at St. Andrew Catholic Cemetery in Milford, Ohio. In lieu of flowers, the family asks that you do something nice for somebody else unexpectedly, and without explanation.

The family of Jennifer Pschesang created this Life Tributes page to make it easy to share your memories.

Send flowers to the Pschesang family.