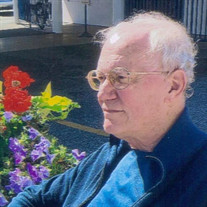 Jeffrey Alan Myers of Worthington, OH, born October 5, 1944, in Galion, OH, passed away the morning of August 16, 2020, at Riverside Methodist Hospital. Jeff is preceded in death by his parents, Harry Myers and Mary (Marsh) Myers. He is survived by his wife of 43 years, Gretchen (Luidens) Myers, his sister, Marsha Myers, niece Molly (Myers) Richard (Shaun), and great-niece Delaney Richard. Jeff graduated from North High School in Columbus and received three degrees from The Ohio State University, including a PhD in Civil Engineering. A few notable pieces to his career include: while in graduate school he designed part of the Transportation Research Center test track; he started his post-graduate career as a principal at a private consulting firm where he designed part of I-670; and the majority of his career was spent as a Team Manager with the U.S. Treasury Department for 31 years. Probably the best way to encapsulate Jeff Myers is to say he was a gentleman and a scholar. His multiple degrees are one indication of how smart he was, but his intelligence went beyond formal education. He was a genius but never made someone feel lesser for it and instead was someone you felt comfortable asking questions to that you may never want to ask another soul. He was an avid reader of books while also reading two newspapers a day and completing the Wall Street Journal crossword daily. In addition to his intelligence, he had a dry sense of humor and could convey his witty remark in great one-liners. That laughter will be greatly missed. The gentleman side of him was shown by his kindness and how he watched out for others. He was loyal to his family and his job, a traditionalist and true leader, a good cook, a lover of all kinds of music, and enjoyed watching sports which included many years of attending OSU football games and tailgating with his family on the Olentangy River. He was observant and always assessing, someone who enjoyed solitude even when he wasn’t alone. And probably most of all, he reveled in his annual trip to Cape Cod with Gretchen where he could spend hours and days sitting on the deck, watching the water, reading and embracing the peace. That was his happy place. He was one of the good guys. A memorial service will be held Monday, August 24th. Because of COVID-19, services will be private for family only. A celebration of life will be held later. Please follow the webcast at 11:00 am on Monday the 24th - accessed thru Schoedinger/Worthington website. Memorial contributions may be made to the Mid-Ohio Food Bank, www.midohiofoodbank.org, or a charity of your choice.

Jeffrey Alan Myers of Worthington, OH, born October 5, 1944, in Galion, OH, passed away the morning of August 16, 2020, at Riverside Methodist Hospital. Jeff is preceded in death by his parents, Harry Myers and Mary (Marsh) Myers. He is survived... View Obituary & Service Information

The family of Jeffrey Alan Myers created this Life Tributes page to make it easy to share your memories.

Send flowers to the Myers family.