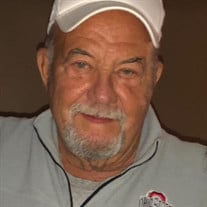 Jeffrey Michael Jenkins "papa" born May 30th 1941 in Columbus, Oh passed away December 28th 2020 after his battle with cancer at the age of 79. He was born to Evelyn and Phillip Jenkins who preceded him in death. He lived in Dublin, OH graduating from Dublin High School in 1960. He met his loving and adoring wife, Ann W Jenkins, who survives. Together they shared 53 years of marriage. In addition, he is survived by his loving children Jennifer Gladish, (Dave) and John Jenkins (Pamela;) sister Pam Frantz (Marion); brother David Jenkins (Lee); and his grandchildren Chloe Gladish, Kelsea Gray, Morgan, Austin and Brandon Jenkins; as well as several nieces and nephews. He enlisted in the United States Army in 1960 and was stationed in Germany for 2 years. He was Honorably Discharged July 31st 1966. He was a proud member of University Lodge #631, Linworth, OH, Scottish Rite 32nd degree, Aladdin Shrine Temple, Brutal Brothers Unit, Grove City, OH. Some of his hobbies included wood working, making birdhouses, G scale trains, and collecting every size of clamp ever made. He also enjoyed spending time with all of his grandchildren, and also his special niece Ava. His favorite pet, Kitty, already misses all the attention and treats Jeff would give him on the back deck. One of his favorite places to travel was San Diego, where he would sit on his favorite bench at the beach and people watch for hours. He was most recently employed with The City of Dublin, where he retired December 4th 2020 after 27 years of loyalty. His leadership over the years created many friendships and he will be cherished by so many people. What can you say about a man that was loved by every person that ever met him? He had so many friends and was appreciated by everybody that he crossed paths with. Jeff will absolutely be missed by everyone. He was such a kind gentle soul and loved as much as he was loved. In lieu of flowers, please consider donating to the American Cancer Society or the Charity Newsies. A Celebration of Life will be planned for 2021. Even though his life ended much quicker than any of us wanted, as Jeff would say, "Let's roll Ann". SCHOEDINGER DUBLIN is assisting the family with arrangement.

Jeffrey Michael Jenkins "papa" born May 30th 1941 in Columbus, Oh passed away December 28th 2020 after his battle with cancer at the age of 79. He was born to Evelyn and Phillip Jenkins who preceded him in death. He lived in Dublin, OH graduating... View Obituary & Service Information

The family of Jeffrey Michael Jenkins created this Life Tributes page to make it easy to share your memories.

Send flowers to the Jenkins family.