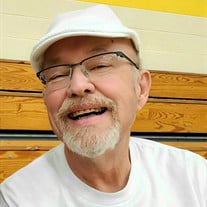 Jeff Carter Harlan was the last-born child to Sarah and James Harlan of Cincinnati, Ohio. He is now the angel to his wife, Margaret, his three daughters, Melissa, Leila and Elizabeth, their husbands, Jason, Devonte and Matt, four grandchildren, Abigail, Lee, Sarah and Iris, his brother John Harlan, his sister Sally Shaffer, several Nieces and Nephews and the family dog Sami. Jeff was welcomed into heaven by both of his parents, his older brother, Jim Harlan, and his brother in-law, Mike Shaffer. Jeff and Marge would have been married 45 years in November 2021. Jeff was a resident of Lewis Center, Ohio where he and his wife lived for twenty years. Prior to living in Ohio, Jeff and his family lived in Greensboro, North Carolina, San Antonio, Texas, Wausau, Wisconsin, Chicago, Illinois and Cincinnati, Ohio. Prior to getting married, Jeff graduated with a Bachelor's in Criminal Justice from The University of Cincinnati and eventually went on to earn his Master's Degree in Business from Salve Regina University in Rhode Island. Starting in 1975, Jeff served the citizens of Cincinnati area towns as a Peace Officer until his first daughter was born. After being a cop, Jeff made the move to Wausau Insurance and then onto Nationwide Insurance where he finally retired in 2010. In retirement, Jeff volunteered for the CASA Program of Delaware and Union Counties (CASA). Here, Jeff advocated for children who were abused, neglected and/or dependent through the juvenile court system. During his seven and a half years with the program, Jeff helped 19 family groups and 35 children. Jeff was known best for his belly laugh, sense of humor, bear hugs, being a listener, protector and educator. Jeff spent his entire life involved in many churches across the nation. Jeff volunteered with the church youth group, sang in the choir, sang solos and duets for the congregation, taught Sunday school and was even knows to partake in small group activities like line dancing with his wife. Later in life, Jeff enjoyed small group classes with his church that read the Bible in chronological order. Jeff's greatest joy of being dad was only topped by being a PapPap/Grandpa to four amazingly talented and beautiful grandchildren. Jeff loved every ounce of the grandchildren and found them to be amusing and hilarious.

Jeff Carter Harlan was the last-born child to Sarah and James Harlan of Cincinnati, Ohio. He is now the angel to his wife, Margaret, his three daughters, Melissa, Leila and Elizabeth, their husbands, Jason, Devonte and Matt, four grandchildren,... View Obituary & Service Information

The family of Jeff C. Harlan created this Life Tributes page to make it easy to share your memories.

Jeff Carter Harlan was the last-born child to Sarah and James...

Send flowers to the Harlan family.