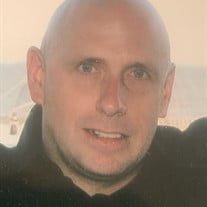 Jason Richard Hinzman, 48, passed away March 11, 2021 in Eustis, Florida. He was born December 15, 1972 in Dearborn, Michigan to Berniece (Brown) Hinzman and the late Lawrence Hinzman. Following his graduation from Pickerington High School, Jason served in the United States Marine Corps. He earned a bachelor's degree from Ohio University in Hospitality Management, which led him to a career in hotel/retail/restaurant management, primarily in Hilton Head. He was fair and caring and helped many of his employees reach their goals. Jason, along with his long-time friend and business partner, Maureen Nash, owned and operated a food truck called "Snackers". He was a great dad to Aidan, Cooper and Jason Jr., (deceased); also survived by their mother Meredith Hinzman. He leaves behind his mother Berniece; brother Eric; nieces and nephews Megan, Caleb, Amber and Lydia and their mother Stephanie Sheppard; uncle Ralph (Karen) Brown and aunts Rose (Krishna) Poudyal and Dorothy Hinzman; numerous cousins, extended family and friends. In recognition of Jason being a 5-year cancer survivor, memorial contributions may be made to MUSC Foundation/Hollings Cancer Center, 18 Bee St. MSC450, Charleston, SC 29425 or to Unity Health on Main, 505C North Main St., Greenville, SC 29601, where Jason served as a volunteer, or to a charity of your choice. Private services entrusted to SCHOEDINGER NORTHEAST. Visit www.schoedinger.com to share memories or extend condolences.

The family of Jason Hinzman created this Life Tributes page to make it easy to share your memories.

Send flowers to the Hinzman family.