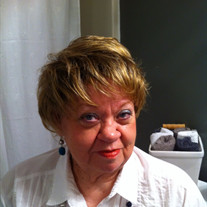 Janet M. McCallister died on September 26, 2021 in Columbus, Ohio at the age of 81. Janet attended Ohio University. She is retired from the Ohio Highway Patrol where she served in the aviation section for 30 years. She is predeceased by her parents, Thomas and Dimple Daniel and husband Elza Ray McCallister. She is survived by Sisters, Judy (Ed) Hughes and Karen (Forrest) Barker; Nephew, Jason Hughes; Nieces, Amy (Dan) Weneberg and Carley (Charley) Pear. She is also survived by special cousin Carol Cordeall and special friends Kathy Carns and Tim and Lisa Wilson. Janet was a lover of all animals. In lieu of flowers please make a contribution in her name to "Speak for The Unspoken". Below is an autobiography written by Janet several years ago: Jan was born Janet M. Daniel in Springfield, Ohio to parents Dee and Tom Daniel. She is the oldest of three girls describing her childhood as "Leave it to Beaver with girls." Jan grew up in Springfield and attended school in the area. She left home and attended Ohio University in Athens, Ohio majoring in Journalism with a secondary in Advertising/Marketing. Her first job was with General Service Publication in Dayton where she worked on the military yearbook and magazines for Wright Patterson A.F.B. Jan then moved to Columbus, Ohio and took a position with Warner P. Simpson Co. in the Advertising Department where she was promoted to Media Director within six months. While working in the Advertising Department she met Elza R. "Mac" McCallister who worked in the Photo Department, which was located in a separate building, and their paths seldom crossed. They became acquainted when the Photo Department needed to borrow a picture from her apartment for a photo shoot. As they say, the rest is history and they celebrated their 31st wedding anniversary on October 24, 2001. Company policy dictated that spouses could not work together so this forced a career change for her. It was time now to become a homemaker. After six months she returned to the job market where she went to work for WCOL-AM/WXGT-FM Radio in downtown Columbus as National Sales Director. She worked with a National Radio Rep.-The Eastman Co., who sold advertising on a national basis. The Eastman Company had 12 offices located across the USA that she visited annually with Mac. Jan worked as National Sales Director in the days of Spook Beckman, John Fraim, Wes Hopkins and others, which made the time memorable. In the mid-eighties the good times were over when the station was sold and it was time for her to go. She left the formal work force and became a full-time volunteer, mostly for Children's Hospital. Jan continues to be active with numerous programs including "TWIG", and The Festival of Trees. She currently serves on two Boards for Children's Hospital, and the Board of the Arthritis Foundation. In July of 1987 she did a favor for a friend. She responded to a request for a temporary position at an office she had never heard of. In April 1989 she became a full-time member of the Aviation Section and has performed admirably since that date. Jan is a team player who is able to adapt to the ever-changing mission of the Aviation Section. Her attention to detail allows her to keep meticulous records concerning all activities performed by the members of the Section. She communicates clearly and concisely both verbally and in writing while maintaining a logical follow-up system to ensure deadlines are met. Jan is always willing to help anyone at any time and constantly goes beyond what is expected of her. She stays until the job is done and done right. Jan and her husband, Mac, currently reside in Worthington along with their two shelties, Abigail and Zachary. Jan is a huge Buckeye fan and displays her loyalty with pride. She enjoys gardening - herbs and flowers, entertaining at home as she and Mac are avid chefs and collecting bears (mainly stuffed ones), silver bells, Longaberger baskets, and cookbooks. She has set new goals for herself to learn to Scroll Saw and teach adults to read. She continues to be a major asset to the Aviation Section and is totally involved in all aspects of our daily operation.

Janet M. McCallister died on September 26, 2021 in Columbus, Ohio at the age of 81. Janet attended Ohio University. She is retired from the Ohio Highway Patrol where she served in the aviation section for 30 years. She is predeceased by her... View Obituary & Service Information

The family of Janet McCallister created this Life Tributes page to make it easy to share your memories.

Send flowers to the McCallister family.