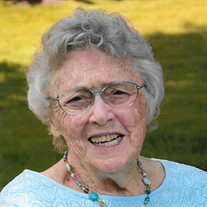 Jane Miriam Daly Moran, 97, a resident of Dublin, OH, and a former resident of LeRoy and Stafford, NY, and Clarks Summit, PA, entered into eternal life on June 30, 2021, after an extended illness. Jane was predeceased by her husband of 52 years, John H. (Jack) Moran, Jr. Jane was a proud and distinguished member of the Greatest Generation. She was born in Trenton, NJ, in 1924, and graduated from Hamilton High School in 1942. On her 20th birthday, in an era when women were expected to stay at home, she enlisted in the United States Coast Guard to serve her country. She served for two years in West Palm Beach, FL, and Cleveland, OH. In 1946, she was Honorably Discharged as a Yeoman, First Class, and married Jack. After raising her family, Jane received her Associate's degree from Genesee Community College and worked for a number of years at New York State Family Court in Batavia, NY, retiring in 1989. Jane was a special mother-in-law to the women that her sons were fortunate to marry. She made everyone feel welcome, and as her extended family grew, she knitted unique and personal Christmas stockings and a host of other gifts for her grandchildren. Jane was predeceased by her parents, Leon and Helen (Byrne) Daly, and by her three sisters: Ursula Horner, Doris Maddalena, and Joyce Matzer. She is survived by her four children: Col (USAF, ret) Terry (Dianne) Moran of Dublin, OH; Kathleen Moran of Springfield, VA; Dr. Michael (Jeanne) Moran, Sr, of Lancaster, PA; and Patrick (Dana) Moran of Rochester, NY; as well as nine grandchildren, six great-grandchildren, and numerous nieces and nephews. The family would like to extend their appreciation to the staff at Capital City Hospice, in particular nurse Amanda, for the exceptional care provided to Jane during her last months. The family would also extend their appreciation to the caregiver staff of Comfort Keepers, especially Pam. A mass of Christian burial will be celebrated in Jane's honor at Our Lady of Mercy and St Brigid Church, LeRoy, NY. Interment will be at St Francis Cemetery in LeRoy, next to Jack. Memorials in Jane's memory can be made to Capital City Hospice or the LeRoy Historical Society. SCHOEDINGER DUBLIN is assisting the family with arrangements and online condolences may be made at www.schoedinger.com.

Jane Miriam Daly Moran, 97, a resident of Dublin, OH, and a former resident of LeRoy and Stafford, NY, and Clarks Summit, PA, entered into eternal life on June 30, 2021, after an extended illness. Jane was predeceased by her husband of 52 years,... View Obituary & Service Information

The family of Jane D Moran created this Life Tributes page to make it easy to share your memories.

Send flowers to the Moran family.