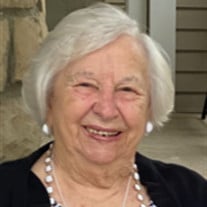 Jane S Davis died December 11, 2020. Born 1921 to Edward W. Schwing and Edna Unzicker Schwing in Trenton, Ohio, Jane lived most of her adult life in Columbus. She is survived by daughter, Christine Davis and nephews and nieces from across the country. She was preceded in death by her husband, William(Bill) North Davis and daughter, Jennifer North Davis, sister Doris Lenore Griffis (Robert Griffis), half-brother Charles Edward Schwing (Mildred Schwing) and half-sister Mary Catherine Schwing. Jane graduated from Camden High school, attended Miami University and transferred to Penn State University, where she received her degree in aeronautical engineering. Employed by Curtiss-Wright in Buffalo NY, Jane was a WWII pioneer using her engineering expertise in drawing, diagramming and designing of the P-40 fighter plane and other WWII aircrafts. She moved back to Ohio upon meeting Bill and she worked as a civil engineer at Armco Steel in Middletown, OH before getting married and starting a family. Beyond significant career achievements, Jane was committed to community service. Active members of Bexley Methodist Church in the 1950's, Jane and Bill transferred to Broad Street Presbyterian Church (BSPC) in the 1960's, where Jane served in many roles including deacon, elder and member of session. In addition, she attended synod school, and taught Sunday school. She could also be found assisting Bill in the BSPC food pantry when needed. Much later in Jane's life, The Church of St Edwards (neighborhood church) embraced Jane as one of their own, including her in their church family. Jane was a member of the ProMusica Sustaining Board and The Franklin Park Conservatory Sustaining Board. She served on the active and assisting boards of Childhood League holding administrative positions in both. Jane volunteered teaching at Maryland Avenue Elementary School, was a Camp Fire leader, put displays together for the Golden Age Hobby Shop and chaired the CSG Mothers' Festival and flower sale. Along with Bill, she was an active member in Beaux Arts. Jane and Bill were long-time members of Columbus Country Club where Jane competed on tennis teams and participated in bowling, platform tennis and bridge. Jane was also a member of Scarborough Tennis Club. Along with all else, Jane and Bill were a part of the Rocky Fork Beaglers and were season ticket holders for The Columbus Symphony and Opera Columbus. In her later years, Jane's greatest pleasure was supporting her daughter, Chris, in running tennis events ranging from national competition to local fundraisers. She assisted with the Babe Zaharias Tennis fundraiser for the American Cancer Society and traveled to MA to help run the prestigious New England Women's Intercollegiate Tennis Tournament for 25 plus division III colleges and universities. She became the cheerleader for the Smith College Tennis Team as well as local Columbus tennis teams. An animal lover, Jane's most loyal and dedicated German Shepherd, Josten, rarely left her side this past 11 years. He brought her joy and support beyond words. Jane led a long and full life. Thanks be to God for the life of Jane Davis. In lieu of flowers, donations may be made to The Childhood League Center 674 Cleveland Ave. Columbus, OH 43215, Broad Street Presbyterian Church Food Pantry 760 East Broad St. Columbus, OH 43205, Leader Dogs for the Blind 1039 S. Rochester Rd. Rochester Hills, MI 48307-3115 or charity of your choosing. A graveside service will be held on Monday, December 21, 12p.m. at Forest Lawn Cemetery. A memorial service with live streaming will be announced at a later time. Arrangements entrusted to Schoedinger Midtown.

Jane S Davis died December 11, 2020. Born 1921 to Edward W. Schwing and Edna Unzicker Schwing in Trenton, Ohio, Jane lived most of her adult life in Columbus. She is survived by daughter, Christine Davis and nephews and nieces from across... View Obituary & Service Information

The family of Marjorie (Jane Schwing Davis) created this Life Tributes page to make it easy to share your memories.