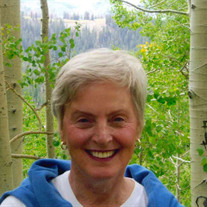 Jane O'Brien Ayers, 79, passed on Thursday, January 28, 2021 surrounded by her family from complications due to Crohn's Disease. She was born in Buckhannon, WVa on September 26, 1941 to William Talbot O'Brien and Esther Young O'Brien. She married James "Jim" C. Ayers Jr on June 23, 1963 and he survives. Also surviving are her children, two sons James "Jim" Ayers of Park City and Joe Ayers of Columbus; two daughters Jennifer Ayers Czerwonka of Columbus and Julie Ayers Larson of Park City. Her siblings, William "Bill" O'Brien of Buckhannon, WVa and Katy Greenhill of Columbus, OH. Jane and Jim were college sweethearts while at West Virginia Wesleyan College. She was the Theta Chi Sweetheart and Homecoming Queen in 1962. Jim's best friend, true soul mate and love of his life for 57 and a half years. Jane was a long-time resident of Upper Arlington, Ohio. She developed Crohn's Disease in 1966, but she did not let that slow her down. She continued to be active with her family, various organizations such as PEO, Daughters of the Revolution (DAR), BCBC Book Club and Trinity Methodist Church Alter Guild. If she was not helping others out, she could be found horseback riding or working in her garden. One of her greatest accomplishments was when she was awarded in 2008 the Central Region Award for Great Comebacks, Crohn's and Colistis Foundation of America. Her other greatest accomplishment was her family. A loving wife, mother and grandmother. Her grandchildren; Lexie, Jackson, Max, Jordan, Luke, Kate, Lincoln and Jamie could always depend on grandma to make some "buckeye" cookies, stop everything to talk to them or simply go for a walk with Jane and Jim's dog Shammie. Jane held many positions with PEO, a philanthropic organization where women celebrate the advancement of women. In leu of flowers, a memorial contribution to PEO Chapter BX Scholarship, c/o 1244 Kenbrook Hills Drive, Upper Arlington, OH 43220 to continue their amazing work of supporting young women. A Private Memorial Service will be held on Tuesday, February 2, 2021 where you may view a public webcast of the service. A Public Visitation will be held from 4:00-6:00PM at SCHOEDINGER NORTHWEST, 1740 Zollinger Road, Columbus, Ohio 43221. Please visit www.schoedinger.com to share memories, condolences, and to view the public webcast of the Memorial Service.

Jane O'Brien Ayers, 79, passed on Thursday, January 28, 2021 surrounded by her family from complications due to Crohn's Disease. She was born in Buckhannon, WVa on September 26, 1941 to William Talbot O'Brien and Esther Young O'Brien. She married... View Obituary & Service Information

The family of Jane O'Brien Ayers created this Life Tributes page to make it easy to share your memories.

Send flowers to the Ayers family.