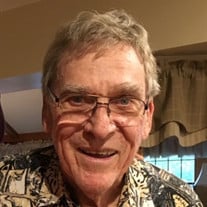 James Elliott Vaughan, aged 77, of Upper Arlington, passed away surrounded by his loving wife and two children, on July 21, 2021. Jim was born on June 29,1944, in Richmond, Virginia, the third child of John Brackett Vaughan, Jr. and Jeanette Elliott Vaughan. He grew up in Mechanicsville, Virginia, graduating from Lee Davis High School in 1962. Following high school, Jim served in the Navy, stationed in Holy Loch, Scotland and later in Key West, FL. Upon his return to civilian life, he began his studies at the Richmond Professional Institute, and later completed his Bachelor of Science in Industrial Technology from Eastern Kentucky University, graduating in 1971. Jim began working with the Occupational Safety and Health Administration (OSHA) in 1971, serving in Appleton, WI from 1977-1980, and then as area director in Columbus, OH from 1980-1991. Upon his departure from OSHA, Jim followed his entrepreneurial spirit, starting Today’s Resources, Inc., a consulting firm utilizing his specialized knowledge and passion for workplace safety. Jim was often requested as an expert witness in legal cases involving OSHA issues. Jim is survived by his wife of 16 years, Dr. Constance Bauer; his children Elisa Belck (Scott) and Alex Vaughan (Kim); stepson Danny Giffin, II; grandchildren Jack, Nicholas, Ari, Lincoln, Mary, and Ella; brother John Vaughan, II; multiple nieces and nephews; former wife and mother of his children, Emily Fraher (Bruce). He is preceded in death by his parents John Vaughan, Jr., Jeanette Vaughan, and his sister Jacqueline McGhee. Jim loved woodworking, watching a good (or bad!) sci-fi movie, cooking with his “secret spices”, working outside at the farm, giving his cats too many treats, and various musical activities. Over the years, he enjoyed playing the 12-string guitar, singing in gospel quartets, listening to music, singing in the choir at North Broadway UMC and singing and performing with Vaud-Villities, where he met his wife, Connie. Jim will be dearly missed. In lieu of flowers, please consider a donation, in memory of Jim, to Vaud-Villities, The James Cancer Hospital, or a charity of your choice.

The family of James E. Vaughan created this Life Tributes page to make it easy to share your memories.

Send flowers to the Vaughan family.