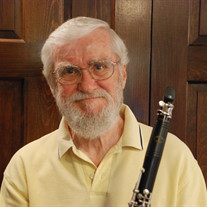 James Michael Pyne, age 83, passed away peacefully on September 20, 2020, at his home in Worthington OH. Born November 3,1936 in Blasdell, NY to John James and Doris Lucille Pyne. He is survived by his wife of 36 years, Kyle, and their three children: Kelsey Warner (Matt), Nettie Pyne, and James Pyne Jr. (Olivia) and three children from his first marriage: Clifford Pyne (Nancy), Linnea Pyne-Jaeger (Michael), and Andrew Pyne (Melanie), along with 9 grand children: Jessica, Robert, Emily, Anna, Molly, Sarah, Ivy, Theodore, Rosemarie, great-grandson: Grayson; brother Robert Lumen Pyne (June), two nieces; Laura Crimmen and Christine Pyne (Lisa) and two nephews: Eric Pyne (Kathy) and Nathan Pyne (Ann). He is preceded in death by his brother John James Pyne, Jr. Jim had a long and distinguished career as a clarinetist and teacher. He completed his BFA degree in clarinet performance and music education from the University of Buffalo, and his MM in performance and literature from the Eastman School of Music. Additionally, he served in the Air Force Reserves. He was an Emeritus Professor of Clarinet at The Ohio State University, where he taught for 26 years. Prior to his tenure at OSU, he was principal clarinet of the Buffalo Philharmonic Orchestra for 27 years, having been selected at age 18 by acclaimed conductor Josef Krips. During his time with the Philharmonic he was frequently featured as a soloist and made numerous recordings. As a teacher he inspired a legion of students at the OSU School of Music, and additionally: The Cleveland Institute of Music, The University of Michigan, SUNY Buffalo, and SUNY Fredonia. Jim collaborated with many of the world's leading clarinetists in the design of his renowned, hand-crafted clarinet mouthpieces. He was a member of the Ohio State University Center for Cognitive Science, and of the Technical Committee for Musical Acoustics for the Acoustical Society of America. He was the Artistic Director for the 1998 International Clarinet Association Convention held at OSU with over 1,000 clarinetist in attendance. Jim gave numerous solo performances, recitals, master classes, and mouthpiece clinics at ICA conventions and summer festivals at: the University of Arizona, Grand Tetons Orchestral Institute, Sebago Long Lake Chamber Music Festival, Lake Placid Sinfonietta, to name a few. Jim was an avid boater, biker, and master fisherman, spending many summers on the waters of Kentucky, Ohio, Minnesota, and NW Ontario with his wife and kids, in pursuit of muskie, northern pike, walleye and bass. He so loved taking his children on adventures, particularly on the high-seas of Lake Erie. A memorial service will be held at 1pm on Saturday, October 24th at Shepherd of Peace Lutheran Church, 520 Village Park Dr. Powell Ohio. In lieu of flowers, memorial contributions can be made to Shepherd of Peace Lutheran Church and/or The Ohio State University Foundation: Clarinet Studio Fund #314566.

James Michael Pyne, age 83, passed away peacefully on September 20, 2020, at his home in Worthington OH. Born November 3,1936 in Blasdell, NY to John James and Doris Lucille Pyne. He is survived by his wife of 36 years, Kyle, and their three... View Obituary & Service Information

The family of James Michael Pyne Sr. created this Life Tributes page to make it easy to share your memories.