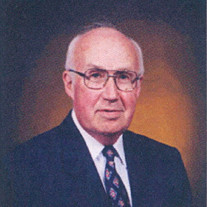 James W. Marquand, 96, of Upper Arlington, passed away September 12, 2021. Jim was born January 13, 1925 in Coshocton, Ohio, the son of Harold M. and Naomi M. (Cox) Marquand. Jim married Lillian L. Lewis on March 24, 1946, in Columbus, Ohio. They were married 72 years. A 1942 graduate of Coshocton High School, he served in the U.S. Army during WWII in the Medical Corps graduating from the Surgical Technical School at Walter Reed Hospital in Washington, D.C. He became ward master of Ward 12 and was corpsman to General John J. Pershing 1943-46. Jim was privileged to take part in the Honor Flight to Washington, D.C. recognizing World War II veterans. Jim earned his bachelor's and master's degrees from The Ohio State University and was an OSU Extension faculty member from 1952-1982, retiring as professor emeritus. He began as a 4-H agent in Tuscarawas County and later served as a regional extension agent based in Wooster and then as assistant state 4-H leader and state specialist from 1971-82. He earned National Distinguished Service Awards as well as being elected to the Ohio 4-H Hall of Fame and the National 4-H Hall of Fame. Throughout his life he strived to help others and be involved in community service. Jim was an avid gardener who inspired family and friends to create their own outdoor spaces to enjoy! Jim was a loving and caring husband, father, grandfather and great-grandfather who, along with his wife, Lil, provided great examples of love, commitment, acceptance and integrity. His wife, Lillian, his parents, his sister, Maxine Erskine and daughter­ in-law, Alice Pennington Marquand, preceded Jim in death. He will be greatly missed by his daughter and son-in-law, Margaret and Michael Fouts of Lebanon, Ohio; son, Terry Marquand of Columbus; grandchildren, Heather (Adam) Luebbehusen, Heidi (Jason) Eckerle, Sarah (Jason) Thomas, Andy (Sara) Marquand as well as seven great­ grandchildren. A family memorial service will be held at a later date. Arrangements entrusted to SCHOEDINGER NORTHWEST. Memorial contributions may be made to the James W. Marquand Family Scholarship Endowment Fund in care of The Ohio State University Foundation, 140 West Lane Ave., Columbus, OH 43221. To share memories or condolences, please visit www.schoedinger.com.

The family of James William Marquand created this Life Tributes page to make it easy to share your memories.

Send flowers to the Marquand family.