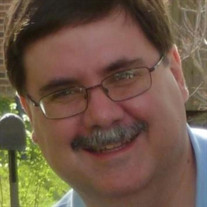 James Paul Laird died on January 13, 2021, following a long battle with cancer. He was born in Columbus, Ohio to Robert Merton Laird, Jr. and Helen McNary Laird on June 9, 1965. He graduated from Northland High School in 1983 and attended the Ohio State University to study microbiology and molecular genetics. He began his career at Battelle Memorial Institute, working first in microbiology, but eventually moving to an IT Coordinator position. He then moved on to a Systems Administrator position with the Ohio State University. Jim is survived by his wife, Karen (Collins), his daughter Anna, and his son Sam; five siblings, Kathleen, Mary Elizabeth (Molly), Robert M. III, Suzanne, and Edward; and three nephews, Robert M. IV, Ryan, and Sean. If you had the good fortune to meet Jim, you know how open and friendly he was, and how much fun it was to talk to him. He was extremely intelligent and had a wide range of interests. He was equally comfortable talking with you about theatre, religion, history, politics, science, social justice, photography, technology, dogs, Monty Python, music, or nearly anything else you can imagine. Jim and Karen married on December 17, 1994. They welcomed Anna in 1996 and Sam in 2001. Jim was a devoted partner and best friend to his wife, and a role model to his children. He taught them the importance of commitment, the value of supporting each other as family, and the grace that comes from apologizing when you mess up. He also encouraged them to be curious and playful, and truly enjoyed sharing his goofy side with them. The best thing about Jim was his sense of humor. He was witty and quick with puns, a master of the "Dad Joke". He saw the humor in even the darkest and scariest of times, and used it to make things just a little bit easier to bear. Due to the risks of Covid, no services will be held at this time. When it is safe to gather in groups again, we will celebrate his life with a time to share our favorite Jim-stories and lots of bad puns. In lieu of flowers, please consider donating to one of the following charities: Steps for Sarcoma Rails to Trails Conservancy WCBE WOSU

James Paul Laird died on January 13, 2021, following a long battle with cancer. He was born in Columbus, Ohio to Robert Merton Laird, Jr. and Helen McNary Laird on June 9, 1965. He graduated from Northland High School in 1983 and attended... View Obituary & Service Information

The family of James Laird created this Life Tributes page to make it easy to share your memories.

Send flowers to the Laird family.