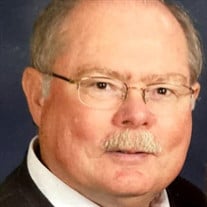 James M. Jenkins, age 77 of Plain City, Ohio passed away peacefully on August 12, 2021. He was born on April 1, 1944 in Ironton, Ohio to the late James Roscoe and Rosemary (Falls) Jenkins. Jim graduated from Lakota High School in 1962, Anderson University in 1967 with a major in Chemistry, and Xavier University with a MBA in 1977. He worked for 27 years for a pharmaceutical firm that changed names several times during his tenure including: Warren-Teed Pharmaceuticals, Adria Laboratories, and Pharmacia. While working as a chemist, he decided to pursue corporate finance and completed his MBA (1977). He became a cost accountant for the same company he worked for as a chemist and subsequently became a licensed Certified Public Accountant (CPA) and Certified Management Accountant (CMA). He was the Vice President of Finance when the company merged with Upjohn in 1995. He spent the final 10 years of his career as the North American Controller for Honda supplier, American Showa. Jim loved watching sports and was a passionate fan of Ohio State football and basketball, the Cincinnati Reds and Cincinnati Bengals. He was a long time OSU basketball season ticket holder. He also had a passion for genealogy, gardening, reading, and hiking with friends. Between 1991- 2004, he completed 8 hikes which included the Appalachian Trail, Grand Canyon, and Red River Gorge. Jim was an ardent supporter of his four grandkids and their activities: soccer, musical theater, horseback riding, and football. Jim was deeply committed to his church, Meadow Park Church of God, and Children of Promise, a non-profit organization where he served on the board of directors. Jim is survived by his wife, Marilyn of 53 years; sons Michael (Sheri) and Jeremy; and four grandchildren: Abby, Cora, Alex, and Alice. He was preceded in death by his parents. SCHOEDINGER DUBLIN will assist with a celebration of Jim's life, which will be held on Tuesday, August 17, 2021 at Meadow Park Church of God, 2425 Bethel Rd., Columbus, Ohio 43220. Family will greet friends from 10:00-11:00 a.m. Service to immediately follow. In lieu of flowers, financial contributions can be made to Children of Promise in his memory. www.childrenofpromise.global

The family of James M. "Jim" Jenkins created this Life Tributes page to make it easy to share your memories.

Send flowers to the Jenkins family.