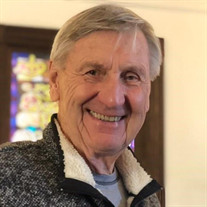 James George Haunty (Jim) passed away on September 30, 2020. He was born on February 23, 1942 in Dayton, Ohio to parents, Katherine Erna Haunty and John Fulmer Haunty, now deceased. He is also preceded in death by daughter-in-law, Nancy Haunty. Jim is survived by his wife, Beverly; sons, John (Jen), and James (Molly) of Hinsdale, Ill; daughter, Katherine (Grant Jackson) of Nashville, TN; stepson, Gregory Ruff (Adele) of Dublin, Ohio; stepdaughter, Jayna D'Herte (David) of Upper Arlington, Ohio, and brother, John (Jack) Haunty (Kathleen) of Powell, Ohio. Also surviving Jim are 16 grandchildren who affectionately refer to him as "Papa". Jim attended Bexley High School and Purdue University, where he studied Civil Engineering and was a member of the Sigma Chi fraternity. Upon graduation, he received a commission in the US Navy Reserves and served primarily in the Mediterranean. His tenure with the Navy earned him the rank of Lt. Commander USNR, but more importantly, this early experience kindled Jim's passion for world-travel and love affair with naval history. Driven by a strong and steady work ethic, Jim's career was an important aspect of his life, and he approached it with the same meticulous care he gave to his flowers and lawn. Entirely spent in the electric energy industry, Jim rose in the ranks of management positions at Columbus and Southern Electric and AEP, ultimately serving as AEP's 11 state system Vice President over Substation and Transmission, Engineering and Construction. After retiring at the end of 2005, Jim actively continued to impart his industry knowledge and expertise, serving as the Chairman of the Board for EC Source Services and on various other advisory board positions in the utility industry. He fully retired as a Director for Mastec in 2017 at the age of 75. Jim's faith was also very important to his life. He was an active member of North Broadway United Methodist Church where he volunteered by mowing the lawn, serving as greeter on Sunday mornings, and most importantly to Jim, was a mentor in a prison ministry, where he visited incarcerated men every week over the past five years. His priority was putting others before himself, and he lived this out in every aspect of his life. Mostly so, with his family. Jim adored coaching his kid's sports teams and being an active member of the Cardinal Boosters and served as president one year in his family's early years. As his children grew, he lived vicariously through them and their children. His love for his family was boundless. Jim relished living simply. Among his greatest loves were, painting, gardening, preparing wonderful meals and sharing pictures of the moments he and Beverly enjoyed them, trips to NYC, a scotch by the fire, reading and most of all his family- his world revolved around time spent with his family. They will miss him for his gentle, humble nature, his generous spirit, his tender-heartedness; and always endear him for his unwavering faith that the Cleveland Indians will win the World Series and the Browns will win the Super Bowl. Although the memorial service for Jim will be private, you are invited to watch his service by livestream by visiting the North Broadway United Methodist Church website at www.north-broadway. and click on Attend a Service, at 1 p.m. on Friday, October 9, 2020. Family has entrusted SCHOEDINGER NORTHWEST CHAPEL with arrangements. Please visit www.schoedinger.com to sign Jim's online guestbook or to share a special memory.

The family of James Haunty created this Life Tributes page to make it easy to share your memories.

Send flowers to the Haunty family.