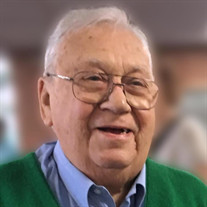 James E. Grace, 91, of Gahanna, Ohio passed away peacefully on October 30, 2020 at home. He was born April 28, 1929 to the late Thomas and Bernice Grace and was a 1948 Roscoe High School Tigers alum, proud to be from a "where men are men and women are glad of it!" Jim served in the U.S. Army and was a Korean War combat veteran. **See detailed service information below. He was co-owner of Abbott's Super Duper on James Road. where he worked tirelessly for over 50 years, often alongside his own family members and employees who became like family. He was inducted into CORGA (Central Ohio Retail Grocers Association) Hall of Fame in 1997 and was known as the King of corny jokes. A faithful follower of Jesus Christ, Jim influenced many lives. He was an active member of Shepherd Church of the Nazarene where he served as a board member, Sunday school teacher and usher/counter. He and Shirley loved to travel and participated in numerous overseas "work and witness" trips. In addition to his parents, he was preceded in death by his first wife Helen V. Grace. He is survived by his loving wife of 25 years, Shirley Richey Grace; children Sherrie (Mark) Stimpert, Doug (Beverly) Grace; stepchildren Ed (Kathy) Richey, Stephen (deceased)(Donna) Richey-Suttles, Kathy (Thom) Jacob; grandchildren: Melissa (Jason), Grant (Courtney), Lauren, Eddie (Miche), Charity (Brandon), Stephen (Ashley) and Phil (Kim); great-grandchildren Ella, Parker, Samuel, Jonah, Vic, Lily, Caleb and Eli; Jim and Shirley's family is especially grateful for caregiver Enny Banda. Visitation 11am-12:30pm Thursday, November 5, 2020 at Schoedinger Northeast, 1051 E. Johnstown Rd., Gahanna, followed by a 12:30pm outdoor service at the funeral home (weather permitting). Masks are required for all services. Private burial to follow at Forest Lawn Memorial Gardens. Those who wish may contribute to any of the following organizations in Jim's memory: OhioHealth Hospice (www.foundation.ohiohealth.com ) Honor Flight Columbus (www.honorflightcolumbus.org ) or Shepherd Church of the Nazarene (www.shepnaz.org ) **Jim was drafted late in 1950 and began his service in December. He completed his Basic Training and Advanced Infantry Training with the 502nd Airborne Infantry Regiment, 101st Airborne Division (Screaming Eagles) at Camp Breckenridge, KY. After arriving in Korea he served with the 3rd Infantry Division from 1951 - 1952: More specifically he volunteered to serve with the 3rd Ranger Company, 2nd Squad, 3rd Platoon as a rifleman and with the Quartermaster Company after the Ranger Company was deactivated. Some of his specific medals and qualifications earned are as follows; Bronze Star, Combat Infantry Badge, Korean Service Medal with 3 bronze battle stars, Republic of Korea Presidential Unit Citation, National Defense Medal and United Nations Service Medal. He also obtained a Ranger Tab. He received an Honorable Discharge from Fort Sheridan, IL. in Sept. 1952 as a Corporal.

James E. Grace, 91, of Gahanna, Ohio passed away peacefully on October 30, 2020 at home. He was born April 28, 1929 to the late Thomas and Bernice Grace and was a 1948 Roscoe High School Tigers alum, proud to be from a "where men are men and... View Obituary & Service Information

The family of James E. Grace created this Life Tributes page to make it easy to share your memories.

James E. Grace, 91, of Gahanna, Ohio passed away peacefully on...

Send flowers to the Grace family.