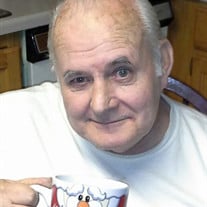 James Edward Gonyea December 23, 1942 - June 17, 2021 Born to Leo and Lois Gonyea in Chicago, IL, he was proceeded in death by his parents, brother Leo, sister Margaret and sister Marilyn. He is survived by nieces, nephews, grandnieces and grandnephews in Ohio, Illinois and Michigan. James graduated from high school on the West side of Chicago at Saint Daniel the Prophet. After graduation, James enlisted in the United States Marine Corp. serving in the South Pacific in the years leading up to the United States full commitment in The Vietnam War. After the Marine Corp. James worked a variety of jobs eventually landing as an elevator erector for Otis elevator company. He would famously tell his nephews of his time putting in place the steel in the John Hancock Building (now called 875 Michigan Ave.) a 100-story, 1,128-foot building, topped out in 1968. In December 1969, James' life took a major turn. A fateful Christmas Eve car accident left him disabled and no longer able to work or live alone. He moved back in with his parents along the Fox River Northwest of Chicago. After a too early passing of his father, James and his mother Lois to moved - living in a variety of homes in the McHenry, IL, area. For a period of time, he and his mother operated The Bavaria Haus in Johnsburg, IL, until deciding to relocate in Florida. In the early 80s, James and his mother relocated back to the Midwest, with homes around Chicago and eventually closer to his sister Margaret Healy in Columbus, OH. He was a frequent visitor to Culter's Drugstore, Zettler Hardware, The Chef-O-Nette and Saint Agatha Church, in Upper Arlington, OH. James eventually found a home at Seton Square North in NW Columbus and lived there until his health necessitated that he be moved into the new Heartland of Dublin as one of their first long-term care residents. James lived with the wonderful caregivers and friends at Heartland until his death on June 17. He will forever be remembered for his positive attitude, a smile for everyone, some of the corniest jokes ever told, Gin Rummy, Monopoly, Paint-by-Number water colors, a profound love of Ohio State Buckeyes and celebrating July 4th on his sister's patio in Upper Arlington. His life was full of challenges and setbacks, but he consistently found a way to make the most with what he had. He appreciated those who were in his life and engaged with all who crossed his path. A family ceremony and burial will be held at Saint John the Baptist Catholic Church in Johnsburg, IL. In lieu of flowers, the family ask you to consider a donation to Catholic Social Services 197 E. Gay Street, Columbus, OH 43215 (614) 221-5891.

James Edward Gonyea December 23, 1942 - June 17, 2021 Born to Leo and Lois Gonyea in Chicago, IL, he was proceeded in death by his parents, brother Leo, sister Margaret and sister Marilyn. He is survived by nieces, nephews, grandnieces and... View Obituary & Service Information

The family of James E. Gonyea created this Life Tributes page to make it easy to share your memories.

Send flowers to the Gonyea family.