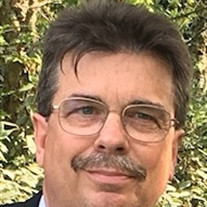 James "Jim" Chester Glass, 61, passed away peacefully at home on November 25,2021 with his wife and brother at his side. Jim was loved by many and has left a permanent mark etched on our hearts. Jim was born February 26, 1960, in Cleveland, Ohio to Richard Jesse and Joanne Margaret (Fisher) Glass. He arrived before his twin brother, John, by a mere 6 minutes, thus starting a rivalry that continued throughout their lives. Jim was a 1979 graduate of Nordonia High School and earned his bachelor's degree from Miami University in 1983. Jim had a successful career in sales, working for Scotts Miracle Grow, CountryMark Cooperative, CISCO Seeds, Buckeye Power, and Terminix Commercial. Jim loved his customers and co-workers at Terminix and shined in his position, earning a place in Terminix's President's Club and receiving the Terminix Award of Excellence, two of his prouder accomplishments. Jim will be remembered for his love of dogs (Daisy, Laci, Molly, Franky and Allie), golf, Cleveland Indians and woodworking. As a teenager, Jim earned the rank of Eagle Scout, with a Bronze Palm, and throughout his life exemplified the spirit and values of the Scout Law. While a member of the Golf Course Superintendents Association of America, Jim enjoyed visiting golf courses where he often managed to play golf several times a week. A lifelong Cleveland Indians fan, Jim attended as many games as he could, even driving from Columbus during the years he had season tickets. Jim was also a devoted Cleveland Browns fan, rooting against the Ravens every chance he got. A lover of all sports, Jim "coached" many teams from his armchair. Jim was a talented woodworker who was willing to build whatever was asked of him, including games, toys, furniture and keepsakes. Jim was known for his ability to build phenomenal bonfires and will be remembered for the great parties he co-hosted with wife, Kerre. He, with his big red truck, was always willing to lend a hand whether it was moving someone, assisting friends with yard work using his big yellow tractor or helping Kerre with her often not well thought-out plans. Jim loved his toys! Jim will be sorely missed by his loving wife Kerre, brother William (Cathy) Glass (Richmond Hill, GA), step-children William (Irina) Kammerer (Lorton, VA) and Maria Kammerer (Columbus), nieces Jessica Glass and Helen Glass, granddaughter Charlotte Kammerer, sister-in-law Sally Glass (Twinsburg), stepmother Emma Glass (Medina), godparents Fay and Don Mattox (Vermillion), numerous cousins with whom he regularly met for a "Cousins' Lunch" and his numerous friends and colleagues. One of Jim's greatest disappointments was not to have the chance to meet his second granddaughter who is scheduled to arrive mid-February 2022. He was preceded in death by his twin brother John and his parents, Joanne Fisher Glass and Richard J. Glass. Family and friends are invited to attend visiting hours from 4pm-7pm, with a Remembrance service from 5:30-6pm on Tuesday, November 30, 2021, at SCHOEDINGER Funeral Home, 6699 N. High St., Worthington, 43085. A second visitation will be held on Wednesday, December 1, 2021 at FERFOLIA Funeral Home, 356 W. Aurora Rd, Sagamore Hills, OH 44067 from 4pm-7pm with a Remembrance service from 5:30-6pm. A funeral Mass will be celebrated at 11:30 am on Thursday, December 2, at St. Barnabas Catholic Church, 9451 Brandywine Rd, Northfield, OH 44067, with interment to follow at All Saints Cemetery, 480 W Highland Rd, Northfield, OH 44067. In lieu of flowers, contributions may be made to Lake Erie Council, Boy Scouts of America, In Memory of James Glass, P.O. Box 93388, Cleveland, OH 44102-5388 or The James Cancer Hospital at OSU Foundation, Attn: The James, In Memory of James Glass, 1480 Lane Ave., Columbus, OH 43221

James "Jim" Chester Glass, 61, passed away peacefully at home on November 25,2021 with his wife and brother at his side. Jim was loved by many and has left a permanent mark etched on our hearts. Jim was born February 26, 1960, in Cleveland,... View Obituary & Service Information

The family of James "Jim" Chester Glass created this Life Tributes page to make it easy to share your memories.

Send flowers to the Glass family.