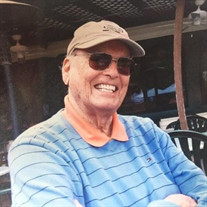 James F. Farrell (92) passed to eternal life on February 27, 2021. Preceded in death by his wife, Dorothy Mae (nee Coggins), his parents, Michael & Ruth Farrell and younger brother, Gordon. Jim was raised in New York City and attended St Catherine of Siena elementary where he came to love the Dominican nuns. He loved basketball and playing with his high school friend, Bob Cousy. He entered the Navy and served in Norfolk, VA as a Corpsman., then attended Pratt Institute of Art. Jim worked as a salesman and studied at Hofstra College, receiving a Bachelor of Arts in English and a Master of Science in Education. He started a 20-year career as a secondary school English teacher on Long Island. He loved reading, literature, poetry, politics and golf. He always had an open book by his side. Jim followed his art and maintained a hobby in drawing & watercolor. After retiring from teaching, Jim obtained a real estate brokers license and a series 7 license to sell financial products. In 1990 he and Dottie retired to Oklahoma City where he got to see his favorite Oklahoma Sooners play in person! In 2006 he relocated to Columbus, Ohio to be closer to family. He made many friends as an active member of his Traditional Catholic Church, St. Anthony of Padua Chapel. Jim loved to tell stories. As a child, while playing in Jamaica, Queens, he saw Babe Ruth playing golf on a local course. He and his friend called out, “Hey Babe,” and Babe responded, “How ya doing boys?” It was one of many stories Jim loved to tell. Jim is survived by his daughters, Susan and Laurie, his sons, Sean (Monica) and Jim (Nancy), his sisters Peggy Hausch & Ruth (John) Fischer, 8 grandchildren, Eric, Jennifer, Heather, Brittany, Thomas, Kieran, Anna & Jane and 8 great grandchildren. A Rosary service will be held Friday 4:30pm at SCHOEDINGER WORTHINGTON 6699 N. High Street, Worthington where visitation will follow from 5:00pm – 7:00pm. A graveside service will be held 10:00am at Resurrection Cemetery, Lewis Center. In lieu of flowers, donations can be made to Ohio Health Hospice or Saint Anthony of Padua Chapel, 2586 Billingsley Road, Columbus, Ohio, 43235-1990.

The family of James F. Farrell created this Life Tributes page to make it easy to share your memories.

Send flowers to the Farrell family.