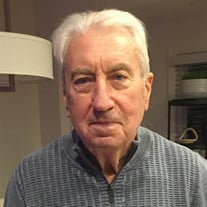 James (Jim) Donohue was born in Forest City, Iowa on December 19, 1943 to Marion and Alice (Geilenfeld) Donohue. He was a 1962 Forest City High School Graduate, and later graduated from Mankato State University (now Minnesota State University) with a bachelor’s degree in Health and Physical Education in 1966. He moved to Gahanna, Ohio in 1966 and married Barbara Souder. They had three children, Trent, Krista (deceased) and Kevin. Jim was drafted in 1969, and he served in the U.S. Army in Fort Leavenworth, Kansas for two years. Barbara and Jim later divorced, and Jim married Janice Collette on August 7, 1987. Janice and Jim enjoyed thirty-three years of marriage, traveling, attending theater, walking, and enjoying each other’s company over morning coffee. Jim had a thirty-one year-career as a Health and Physical Education Teacher in the Groveport Madison Local School District. He coached several sports, and he also served as a basketball referee for the Ohio High School Athletic Association for twenty-five years. After retiring from the education field at age fifty-two, Jim took a number of jobs, then at the age of sixty, started his own handy-man business called Jim’s Jobs. From the age of sixty to the age of seventy-seven, Jim performed all sorts of “handy-man” jobs from cleaning windows, performing yard work, painting, ferrying people to the airport, pet sitting, and house-watching. Jim truly loved his Jim’s Jobs customers. Jim’s passion was baseball. He played softball for a number of years on the Peace Lutheran Church softball team. He was an avid baseball card and memorabilia collector. When Jim turned 70, he played on a “senior” softball team as the shortstop. He loved athletics, and Jim could quote scores, team names, and players while listening to “Sports Talk” on his car radio. Jim became clean and sober in 1991, and he remained an active member of Alcoholics Anonymous for twenty-nine years. He attended AA meetings several times a week, making many AA friends. A special thanks to Jim’s sponsors who walked alongside him in sobriety. Jim is survived by his wife, Janice, of thirty-three years; his brother David and wife Linda of Roland Iowa and their family, Jason, Jake and Jenni and their children Morgan and Arron; son Trent, wife Jenny, and five grandchildren, Marin, Grayson, Farah, Kellan, and Faith of Warrenton, Oregon; son Kevin, wife Sara, and grandson James of Billings, Montana; and sister-in-law Babs of Galloway, Ohio and her children Leah and fiance Kelly of San Francisco, California, and Mary, of Cincinnati, Ohio. Visitation will be held at the Schoedinger (Gahanna) Funeral Home, 1051 Johnstown Road, Gahanna, Ohio 43230 from 1-4 p.m. on Saturday, March 6, 2021 with a memorial service at 4:00 p.m. at Schoedinger. Pastor Doug Warburton of Peace Lutheran Church, Gahanna, Ohio will preside. In lieu of flowers, friends can make donations in Jim’s memory to Peace Lutheran Church, 455 Clark State Road, Gahanna, Ohio 43230 for community outreach programs including community meals to feed the hungry, and other outreach programs selected by Peace Lutheran Church. The Serenity Prayer God grant me the serenity to accept the things I cannot change, the courage to change the things I can, and the wisdom to know the difference. Amen.

The family of James Donohue created this Life Tributes page to make it easy to share your memories.

Send flowers to the Donohue family.