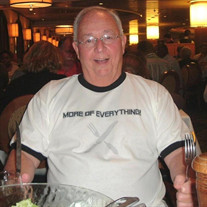 Jack Winfield Burns, age 85, passed away Thursday, October 14, 2021 at Hilliard Assisted Living in Hilliard, OH after an extended illness. Jack was born February 20, 1936 in Portsmouth, OH, the only child of the late C. Albert Burns and Freda L. (Darragh) Burns. He graduated from Oak Hill High School in 1954 and married his high school sweetheart, Peggy Lee Lloyd, in 1955. Jack began his working career at Sivad Ceramic Corporation in Oak Hill as a lab technician, later joining the management team at the Jackson Goodyear plant. Jack ultimately realized his entrepreneurial dream when he opened J.B.'s Sport Shop stores in Oak Hill and Wellston. He and Peggy operated both stores until their retirement. Jack is survived by his sons, Scott (Rob) of Dublin, OH, Michael (Jeannie) of Hilliard, OH, grandsons Nicholas and Max, and extended family members Mary Huston and Tammy (Randy) Hughes of Oak Hill. In addition to his parents, Jack was preceded in death by Peggy, his loving wife of 64 years. Jack cherished time with family and friends, talking current events, telling a good joke and acting as grill chef. He was an avid fan of "The Andy Griffith Show" and "Seinfeld" reruns and never met a true-crime documentary he didn't like. He loved the Bengals and the Buckeyes. Jack's favorite expression was "more of everything" and he certainly lived his life that way. To honor his wishes, there will be no calling hours or funeral service. Arrangements are under the direction of Schoedinger, Dublin, OH.

The family of Jack W. Burns created this Life Tributes page to make it easy to share your memories.

Send flowers to the Burns family.