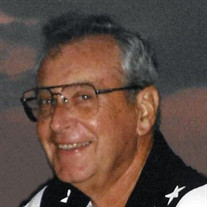 Blair Jr, Ivan H. Age 88. Born Oct 3, 1933, in Washington Court House, passed peacefully to the lord's arms on 11/8/21. Ivan was preceded in death by Ivan Sr and Edna Blair, wife Nancy and daughter Linda. He is survived by his sons, Jeff (Jennifer), Doug (Michelle) and daughter Brenda. Also, he is survived by his grandchildren Tyler Rae, Garret and Connor Blair (Aryelle) along with great grandchildren Luke, Ben, and Sam as well by several nephews and nieces. Ivan graduated from Washington Court House high school and began a long and devoted career at Nationwide Insurance where he retired in 1990 after 41 years of service to spend time with his wife, Nancy. He received a BA from Franklin University and attained the designation of CPCU while working at Nationwide. While at Nationwide Ivan participated in several of their activities, serving as President of the Activities Council for a period of time. Through these activities and sports, Ivan met lifelong friends and was part of the "Old Bucks" a group of friends that played and socialized together for years. To this day the Old Bucks that are still with us, gather and share stories that have lasted a lifetime. He was an original member at Linden Lutheran Church and was an active member of Meadow Park Church of God. Ivan was a rabid sports fan who loved anything involving Ohio State athletics. While his normal demeanor was that of a calm and collected person, once a Buckeye game came on TV or while he attended one, that calm demeanor went out the door and he soon began pacing and screaming "words of encouragement" to the team. Ivan played several sports while growing up, earning the nickname of "Steady." He once shared the story where he scored half his teams points in a varsity basketball game. What he failed to share until much later is that they only scored 4 points the entire game. He spent many weekends at Southview softball fields watching the games as he loved the game of softball and played it until he was 70 years old. Ivan was an active member of the Elks Lodge #2700 and a longtime member of the Alpha Athletic Club where he served as President and a trustee for many years. The family would like to thank the staff at Paramount Senior Living in Westerville as well as a HUGE thank you to Summit Hospice and their entire staff who has been with Ivan for the past 8 months. Without their help, support, and devotion to him the family would have been lost. His family will receive friends from 2-5pm, Sunday, November 14, 2021 at SCHOEDINGER NORTH, 5554 Karl Road. A Graveside Service and Interment will be held at 10:00am, Tuesday, November 16, 2021 at Kingwood Memorial Park, 8230 Columbus Pike, Lewis Center. All are welcome to attend. In lieu of flowers the family would like donations made to Summit Hospice 2760 Airport Dr., Building C Columbus, OH 43219.

The family of Ivan H. Blair Jr. created this Life Tributes page to make it easy to share your memories.

Send flowers to the Blair family.