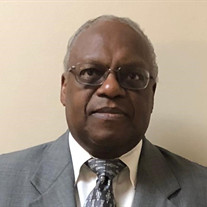 The Right Honorable Ijoma Robert Flemister, 32°, DCL, GC, 70, passed away on September 28, 2021 in Columbus, OH, USA. He was born on April 11, 1951 in Monrovia, Liberia. He became the legally adopted son of James Sr. and Freda Flemister, his grandparents, who nurtured his academic achievements, his devotion and service to God and to Liberia and guided him to become the devoted father and grandfather he proudly became. Ijoma would lead an auspicious life of honors, accolades and achievements. From a young age he showed tremendous promise, attending William V. S. Tubman Laboratory High School in Monrovia where he was valedictorian, in 1968. He won a United States Agency for International Development (USAID) scholarship competing on West Africa level. From there he would go on to The Ohio State University (Columbus, OH, USA) to receive a degree in Industrial and Systems Engineering before returning to Liberia. First elected to the House of Representatives at age 23, Ijoma is the youngest ever elected Legislator in the history of the Republic of Liberia. Historically, he is also the only Liberian citizen ever to serve simultaneously as a statutory officer of both the Legislative and Executive branches of the Republic. On nomination of the Bassa Community ward of Monrovia, Montserrado County, Ijoma was elected to represent District #1, Montserrado in the House of Representatives, 48th and 49th Legislatures of Liberia, with an agenda to utilize the talents of Liberia's precious jewels, renew culture, maintain fiscal responsibility, and use modern technology. Ijoma was dedicated to the Church. Throughout his life, he served the Church in many capacities. He will be remembered as a truly dedicated statesman to the Liberian people but most importantly, as a loving, caring and dutiful father, full of wisdom, while maintaining the joy that life provides. To the enumerable lives that he encountered he was a sage, an example to emulate; but most important to himself, a friend who cherished everyone. Left to cherish his memory are his Wife: Doris Barchue Flemister ; Mother, Joyce Markham, Siblings: Tulasi Markham (Isabelle), Agbe Markham, Enyonam Moloane (Edward); Uncles; Clifton Flemister (Abeoseh), Harold Flemister (Augusta); Aunts: Mary Grey (Curtis), Maima Flemister (James Jr.-d.), Emma Flemister (Frank-d.) , Ernestein (Clifford-d.), Helen Flemister. He left behind four devoted Sons: Ijoma Robert "JoJo" Flemister (Holly), Ijoma James "JaJa" Flemister, Darcy Barchue, and Dorma Carl "Togah" Flemister. He will be deeply missed by his Grandchildren: Noah, Solomon, Levi, Ivy, Violet, Jesse, Benjamin, and a host of cousins, nieces, nephews and friends, residing all over the world. The service will be held on Saturday, November 6, 2021 with visiting from 12-1pm with a funeral service to start at 1pm at SCHOEDINGER NORTHEAST, 1051 East Johnstown Road, Gahanna, OH 43230. Due to COVID we wish to keep this a small (vaccinated) family affair. Any condolences are welcome at the link below, as well as any stories and photos in remembrance. The service will be video streamed and is accessible from the funeral home link (below). Funeral home: https://www.schoedinger.com/obituaries/Ijoma-Flemister/ Autobiography and Curriculum vitae: http://ijomarobert.flemister.info/irf/irfbn.html

The Right Honorable Ijoma Robert Flemister, 32°, DCL, GC, 70, passed away on September 28, 2021 in Columbus, OH, USA. He was born on April 11, 1951 in Monrovia, Liberia. He became the legally adopted son of James Sr. and Freda Flemister, his... View Obituary & Service Information

The family of Ijoma Robert Flemister created this Life Tributes page to make it easy to share your memories.

Send flowers to the Flemister family.