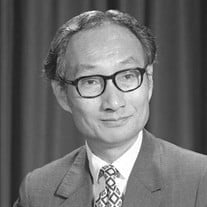 Hsien Ching Ko, 93, died peacefully on August 19, 2021 at his home in Columbus, Ohio in the company of his children. His mind was sharp until the day he passed. H.C. was born in Tainan, Taiwan on April 28,1928, the fifth child of eight children, during the Japanese Occupation. He was educated in three languages through high school, and learned a fourth after the new government required all Taiwanese to speak Mandarin. At 17 years-old he was one of only three Taiwanese students who passed an entrance exam to study in Japan. During his first year of study in Japan, the U.S. dropped atomic bombs on Hiroshima and Nagasaki, leading to the end of the war and of his studies in Japan. Back in Taiwan, he studied Electrical Engineering at National Taiwan University, where he graduated at the top of his class. A fortuitous meeting with a friend led H.C. to apply to graduate school in the United States. He was unaware of the possibilities of graduate school studies until this meeting. He was so appreciative of the opportunity to study in the United States where he felt much safer and freer after leaving Taiwan, whose post-WWII government had imposed martial law. The Ohio State University offered H.C. a full scholarship for tuition, room, and board. Living in the football stadium dormitories, he not only excelled in his studies, receiving his masters and PhD in three years, he also became a longtime OSU Buckeyes football fan. H.C. studied radio astronomy under his advisor and sponsor, Dr. John Kraus, where they built one of the first radio antenna systems to detect radio waves from outside the solar system. They discovered many galaxies and radio stars and created the first “radio map” of the sky based on electromagnetic radio waves detected by their antenna systems. This map was displayed at the Chicago Museum of Science. Although he loved his research, H.C.’s real love was teaching. He received many teaching awards, including the Eta Kappa Nu Teaching Award in 1975 and the College Quig award for Distinguished Teaching in 1977, both from his EE students. He mentored many graduate students during their PhD dissertations. Many of the students were far from home and every year H.C. and his wife PiYu welcomed them into their home for holiday dinners. H.C. became the fourth Chairman of The Ohio State University Electrical Engineering Department and was asked to remain there for 3 terms, a total of 12 years, from 1977-1990. During that time he encouraged graduating students to leave and study outside of OSU and then come back and bring fresh new ideas to the department. He also helped establish a guaranteed salary for professors, when previously they relied on their own grant money to get paid. He also purchased the first VAX computer system that took up an entire floor for research in the EE department. H.C. is predeceased by his wife, PiYu Ko, and is survived by his loving children Stella Ko (Jim Carey), Paula Ko (Robert Kane) and Benjamin Ko, and his brother Hsien-Ming and sister Jin-Fang. He also has 5 adoring grandchildren, Maddie, Max, Izzy, Katie, and Daniel, and many nieces and nephews, who all learned moderation, honesty, and hard work from him. He is also survived by a close and large extended family in Columbus and across the United States and Taiwan. He was one of the first Taiwanese to settle in Columbus, Ohio and was an active and long-time member of FAPA (Formosan Association for Public Affairs), and the Columbus chapter of the Taiwanese Association of America. H.C. lived a full life and touched many in his orbit. He will be missed by all. H.C. asked that his service be private but in remembrance, donations can be made to OSU’s H.C. and Piyu C. Ko Endowment Fund: https://giveto.osu.edu/makeagift/?fund=663887

Hsien Ching Ko, 93, died peacefully on August 19, 2021 at his home in Columbus, Ohio in the company of his children. His mind was sharp until the day he passed. H.C. was born in Tainan, Taiwan on April 28,1928, the fifth child of eight children,... View Obituary & Service Information

The family of Hsien Ching Ko created this Life Tributes page to make it easy to share your memories.

Send flowers to the Ko family.