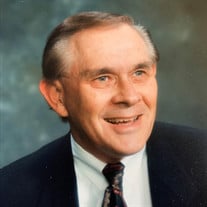 Dr. Homer F. Mincy Jr. of Upper Arlington, passed away Wednesday, October 28, 2020, after a short illness at Riverside Hospital. A native of Roane County, Kingston, Tennessee, Dr. Mincy was preceded in death by his parents, Rev. Homer F. Mincy Sr. and Eva Hedgecock Mincy of Athens, Tennessee. He is survived by his wife of 66 years, Ila Breazeale Mincy; son, John (Paula) and grandchildren, John Tyler and Lexie Mincy of Hilliard, Ohio; brother Virgil (Dorothy) of Granger, IN; Elizabeth Axley of Murfreesboro, TN; and several nieces. Dr. Mincy graduated from McMinn County High School, in Athens, TN, and Tennessee Wesleyan University, Athens, TN. He served his country as a radio technician in the US Army during the Korean conflict for two years. He received advanced degrees from the University of Tennessee, Knoxville, where he also was an Associate Professor in the College of Education for two years. While continuing his formal education, he was a teacher and principal in the Loudon County (TN) School System. His first superintendency was with the Greeneville, TN School System followed by employment as Superintendent of the Oak Ridge School System in Anderson County, TN. In 1972, he was appointed Superintendent of the Upper Arlington, Ohio School System and served there until his retirement in 1993. During this time, he was active in and honored by several organizations working to support primary and secondary education. He was honored to be named the Ohio Superintendent of the Year. He was a member of the Upper Arlington Rotary where he was a Paul Harris Fellow, Torch Club, VFW, American Legion, First Community Church, and Phi Delta Kappa. Following retirement, he was a principal founder of the Alliance for High Quality Education in Ohio. In 2015, he was awarded the Homer F. Mincy Education Leadership Award, and was acknowledged for the “pivotal, inspirational role he played as the Alliance came together and grew through its early years.” He enjoyed travel, golf, college sports, and especially enjoyed the presence of family and friends. He was forever grateful for the loving support of his wife Ila through his professional career and her tireless companionship and care during their last years together. Public visitation will be held from 11-1:30pm on Tuesday, November 10, at the Schoedinger Northwest Chapel, 1740 Zollinger Rd. Private Celebration of Life ceremony will be held following at 1:30pm. Guests are respectfully asked to wear masks and attendance will be monitored to ensure safety for everyone attending. Rev. Jim Long officiating. The ceremony will be livestreamed at www.Schoedinger.com. In lieu of flowers, memorial contributions can be made to the Upper Arlington Education Foundation, 1950 N Mallway Dr, Columbus, OH 43221, the Upper Arlington Community Foundation, 3600 Tremont Rd, Columbus, OH 43221, or First Community Church Foundation, 1320 Cambridge Blvd, Columbus, OH 43212, in his memory. Please visit www.Schoedinger.com to share memories or leave a condolence to the family.

The family of Dr. Homer F. Mincy Jr created this Life Tributes page to make it easy to share your memories.

Send flowers to the Mincy family.