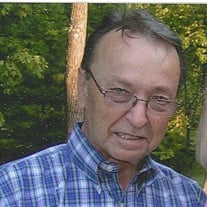 Hiram Edward (Ed) Snodgrass, 78 of Delaware, went home to the Lord on Monday October 5, 2020 surrounded by family and loved ones following an extensive battle with Parkinson's. Born in Jackson Ohio on September 1, 1942, he moved to Columbus at an early age and was a 1960 Graduate of South High School. Ed was the proud owner of Stults and Associates; an Engineering, Planning and Surveying firm in Delaware Ohio, where he assembled a 30+ year career. Under his leadership, his team served as pioneers in the successful expansion of Delaware County in the 70's, 80's and 90's. His work was instrumental in laying the groundwork for the successful land development enjoyed in Delaware County today. Ed was a quiet, reflective man whose word was his bond. He was kind, giving and very loyal to his friends. Despite being soft spoken, he had a wonderful sense of humor that kept his friends and family laughing. He had a passion for his church and was devoted to the Lord as well as his friends that shared his faith. He enjoyed listening to Elvis Presley music, watching the buckeyes, bowling, golfing and being outdoors. He was preceded in Death by his parents Mary and Joseph Snodgrass and his mother/father in-law, Oak and Helen Perry. He is survived by his wife Rita Snodgrass, Brothers James (Joyce) Snodgrass of Indiana, Sam Snodgrass and Dan Parish as well as a Sister Peg Snodgrass-Tackett all of Columbus. In addition, he leaves His Daughter Susan (Bruce) Heinemann of San Diego, Son Ed (Shelley) Snodgrass of Sunbury, His Grandchildren Katie (Ken) Whigham of Nashville, Taylor (Stephanie) Heineman of Columbus and Grant Snodgrass of Sunbury as well as Great Granddaughter Hollyn Whigham, the mother of his children Shirley Taylor-Snodgrass of Delaware and many other family members and loving friends. Friends will be received on Monday October 12, 2020 at the Schoedinger Worthington Chapel at 6699 N. High Street Worthington, Ohio 43085 from 10:00-11:30 am with a celebration of life ceremony immediately following. In lieu of flowers the family has requested memorial donations to Heartland Hospice Care. Watch webcast for H. Edward Snodgrass: https://webcasts.lifetributes.com/1094821

Hiram Edward (Ed) Snodgrass, 78 of Delaware, went home to the Lord on Monday October 5, 2020 surrounded by family and loved ones following an extensive battle with Parkinson's. Born in Jackson Ohio on September 1, 1942, he moved to Columbus... View Obituary & Service Information

The family of H. Edward Snodgrass created this Life Tributes page to make it easy to share your memories.

Hiram Edward (Ed) Snodgrass, 78 of Delaware, went home to the...

Send flowers to the Snodgrass family.