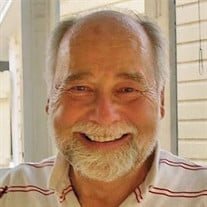 Hewett Probasco Mulford, Jr, age 84 of Columbus, passed away November 29, 2021. He was loved by many and forgotten by few. He will be greatly missed by his loving wife of 34 years, Mary Ann Mulford. He was the devoted father of Marcena "Marcy" (David) Shultz, Christopher (Adele) Mulford, Michael Mulford, and Ann (Neil) Ritzert; and a dear grandfather to Madelyn (Dylan) Murray, Hayden Shultz, Anna Shultz, Hannah (Isaiah) Smith, James Ritzert, Elizabeth Ritzert, and Abigail Ritzert; great grandson, Quentin Murray. He is survived also by his beloved sister, Ann Philippo, mother-in-law, Doris Kettler, and cousin Deborah Mulford. Hewett was cherished by numerous nieces, nephews, relatives, extended family members and dear friends. He was preceded in death by his parents, Hewett P. and Mary Magdalene Mulford, Sr., his brother-in-law, John Philippo and nephew, John "Tony" Philippo. Hewett was born in Cincinnati, Ohio, during the great Ohio river flood of 1937, and grew up in Lebanon, Ohio. Hewett attended Lebanon High School and graduated from Culver Military Academy. Following high school, Hewett went on to study floriculture at Cornell University and graduated with a degree in philosophy from the College of Wooster, followed by 2 years of graduate studies at Union Theological Seminary in New York City. Hewett returned to Lebanon where he spent over 53 years before moving to Columbus. Hewett's entrepreneurial spirit led to his success with multiple companies including Mulford Greenhouses in Lebanon, Ohio and HP Mulford company. Hewett was a past member of the Lebanon Rotary Club, Lebanon Jaycees, Lebanon Tree Commission, and is currently a member of Westminster Presbyterian Church in Dayton. Hewett also enjoyed Bible study and attending services at St. Patrick's Episcopal Church in Lebanon, Ohio. In his spare time, Hewett had many passions, including gardening (hosta and daylilies especially), studying various religions, writing Haiku poetry, traveling, movies, watching football - especially his beloved Buckeyes, - making new friends, swimming, yoga, and hosting parties for family and friends. At various times in his generous and expansive life he was known as "Mr. Thanksgiving," "Two-Pie Hewie," "Over-Do-It Hewett," "Huey," "Hew," "Grandpa," and "Papa Hewett." A visitation reception will be held Thursday, December 9, 2021, from 12:00-2:00 P.M. at Schoedinger Funeral Home at the Upper Arlington location - 1740 Zollinger Rd, Columbus, OH 43221. Services to follow at 2:00 P.M. A webcast will be available during and after the service on www.schoedinger.com. A graveside service will be conducted at the Lebanon Cemetery on December 10 at 11:30 a.m. In light of the ongoing pandemic, the family requests that all those who wish to share their condolences in person have received their COVID-19 vaccination, wear a mask, and please stay home if they are experiencing any symptoms. At some time in the future in Lebanon, Ohio, a celebration of Hewett's life will be held for his many friends and family. The family wishes to thank the staff at First Community Village for their loving care and appreciation of "Hew." Memorial contributions may be made to First Community Village Foundation, 1800 Riverside Dr., Columbus, Ohio 43212 or to the Hewett P. Mulford Nature Trail, c/o Countryside YMCA, 1699 Deerfield Road, Lebanon, Ohio 45036.

Hewett Probasco Mulford, Jr, age 84 of Columbus, passed away November 29, 2021. He was loved by many and forgotten by few. He will be greatly missed by his loving wife of 34 years, Mary Ann Mulford. He was the devoted father of Marcena "Marcy"... View Obituary & Service Information

The family of Hewett P. Mulford, Jr. created this Life Tributes page to make it easy to share your memories.

Send flowers to the Mulford family.