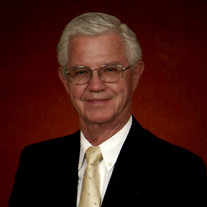 Herman Leon Cook, Sr., age 94, of Columbus, OH passed away December 7, 2021. Herman was born in Winston-Salem, NC on October 24, 1927. He was preceded in death by parents, Flossie Brewer Cook and John Thomas Cook, sister and brother-in-law, Nancy Cook Welfare and Fred Welfare, and sister and brother-in-law, Jane Cook Crotts Corn and Jack Corn. He is survived by his wife, Ruth H. Cook, whom he married on Dec. 17, 1949; three children, Herman Leon Cook, Jr. of FL; Kay Cook Kendall (Ed) of Glen Ellyn, IL; Jennifer Cook Haddow (Mike) of Upper Arlington, OH; daughter-in-law, Ann Miller of Lenoir, NC; six grandchildren, whom he loved deeply, and of whom he was very proud: Laura Kendall Zimmermann (Geoff) of Aurora, IL; Thomas Edward Kendall (Margie) of Johnson City, TN; Kyle Joseph Lookreddy (Esha) of Portland, OR; Amy Kendall (Ben Pluckebaum) of Seattle, WA; Kelly Ann Haddow and Christopher Joseph Haddow, of Upper Arlington, OH; three greatgrandchildren: Mathew Edward Zimmermann, Holland Martha Kendall and Rosemary Anne Kendall. He is also survived by sibling in-laws, Rev. Burke E. Holland of Fuquay Varina, NC, Mary (Leon) Bixler of Downingtown, PA, Carolyn Holland of Mt. Pleasant, SC; and Carol Pearson of Harrisburg, PA; and many nephews, nieces, cousins and dear friends. He was a veteran of the U. S. Navy; a graduate of the N. C. State Univ. School of Industrial Engineering; a graduate of Darden Executive Educational Development Training at Univ. of Virginia; a charter member and past president of the Winston-Salem chapter of the American Institute of Industrial Engineers; a registered professional engineer in the states of North Carolina and Ohio, having served as a member of the board of Professional Engineers while living in North Carolina. He was active in a number of professional engineering and civic organizations, including having served as Past Region President of the Telephone Pioneers and past Region President of the Wally Byam Airstream Caravan Club. He was a former member of Golden-K Kiwanis Club of Worthington. He worked for Western Electric Company, ATandT, and Lucent for 38 years at plants located in Winston-Salem, NC; Burlington, NC; Greensboro, NC; Cicero, IL; Denver, CO and Columbus, OH. Herman's life was enriched by the golf he played, by the extensive traveling that he and Ruth did through the years, by playing his violin, by driving the sports cars he owned through the years, and by spending time with family and friends. Herman always lived by the Christian principles that were taught and instilled into his life from childhood. He was never critical of others, but recognized their good qualities and characteristics. If you were his friend, you remained his friend for life. He was truly an exceptional individual. A memorial service will be held at Clemmons First Baptist Church, 3530 Clemmons Rd, Clemmons, NC 27012 on January 15, 2022; visitation at 1 pm, and the service at 2 pm. A reception will follow. Donations may be made to The Childhood League Center, 674 Cleveland Ave., Columbus, Ohio 43215, ; The Home for Families, 33 N. Grub St., Columbus, Ohio 43215, ; or donor's choice of charity. Plans are being made for a funeral service that will be held in North Carolina in January.

The family of Herman Cook created this Life Tributes page to make it easy to share your memories.

Send flowers to the Cook family.