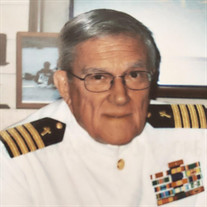 The Reverend Dr. Herb Goetz peacefully met the call of God and was ordered home to be with his creator on Friday, December 18, 2020. He was 86. His remarkable career was as a Navy Captain, Chaplain Corps, with duty stations including USS VESOLE (DD-878); USS JOHN F. KENNEDY (CV-67); Marine Air Group 36; Naval Air Facility Midway Island; NATO Headquarters, Italy; US Naval Forces Europe, England; and Camp Lejeune, North Carolina. Capturing his ministerial call early in his career, then-Lieutenant Commander Goetz describes his desire to share the love of God as a "need to respond to the void in humankind, to an emptiness, known or unknown by acting in a spirit of acceptance and love, remembering my humanness as I minister to humans as humans in service to my God." After concluding his thirty years of active duty service in 1990, he then served an additional 17 years at The Ohio State University as a volunteer Chaplain on the staff of the NROTC, as National Chaplain to the US Navy League, and as Director of Religion and Education at the Lakeside Chautauqua. He was also an Eagle Scout. In addition to numerous military and civilian recognitions, Herb is the recipient of fifteen military medals including two Legion of Merit awards. He graduated in the class of 1952 from Portsmouth High School, in 1956 from The Ohio State University, and Eden Theological Seminary, St. Louis, Missouri, in 1960, with additional formal education at University of Cambridge, England. He was awarded an honorary doctorate degree in 2002 from Eden Seminary. He is a Vietnam veteran. Herb is survived by his wife Mary Ann and grown children Tim (Nancy) Goetz, Lisa (Bill) Miller, Cindy (Mark) LaRue, and Matthew Goetz; grandchildren Blake LaRue, Kevin (Ellie) LaRue, Kiley (Troy) Jensen, Caleb Miller, Sidney Goetz, Josh Miller, Max Goetz, and Sylvia Goetz; and three great grandchildren. Private services will be held for the family. Interment at Arlington National Cemetery in late spring. Memorial donations may be made to Boy Scout Camp Oyo at 614-310-1328, The Italian Childrens' Mission at 724-510-4357, or Mid-Ohio Food Collective at https://give.midohiofoodbank.org. Arrangements entrusted to SCHOEDINGER NORTHWEST.

The Reverend Dr. Herb Goetz peacefully met the call of God and was ordered home to be with his creator on Friday, December 18, 2020. He was 86. His remarkable career was as a Navy Captain, Chaplain Corps, with duty stations including USS VESOLE... View Obituary & Service Information

The family of Herbert Goetz created this Life Tributes page to make it easy to share your memories.

The Reverend Dr. Herb Goetz peacefully met the call of God and...

Send flowers to the Goetz family.