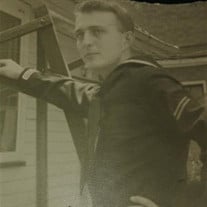 On Sunday, October 11, 2020, Herbert Richard Burdette Jr, left this earth and returned home to his Heavenly Father. He was welcomed by many loved ones, including his father Herbert Sr, mother Katherine, sister Alma Lou, and son Kelly. Most importantly, he is now reunited with his sweetheart, Carole, of over 70 years, 66 of them being married. Herb was born in Evansville, IN on April 1, 1931. He may have been born on April Fool's Day, but his life has been no joke. Herb graduated from Central High School class of 1949 in Evansville, IN and was known by all as a basketball star. He attended Indiana State University on a basketball scholarship and studied Special Education. Herb served proudly in the US Navy from 1952-1956, which included service aboard the USS Coral Sea during the Korean Conflict, and has called this time the best four years of his life. While enlisted, he married his forever companion, Carole Raye Schnautz, on June 27, 1953. Together they traveled from port to port making lifelong friends everywhere they went. After an honorable discharge from the Navy in 1956, Herb earned an esteemed position at North American Rockwell and settled his family in Columbus, OH. He was steadily employed there until 1977. He and Carole both were outgoing and loved serving in the community. From 1969-1970, Herb served as President of the Devonshire Civic Association. Herb always had a knack for business and had a dream of being an entrepreneur. He made his business dream come true in 1972 as he and Carole were the owners and operators for 24 years of Burdette's Market near the Ohio State University campus. Herb was not one to sit idly in retirement so he used his talents to become a Master Tax Advisor as a federally Enrolled Agent with HandR Block for 15 years. Because of Herb's hard work and smart business habits, he and Carole were able to vacation often to their favorite spot, Las Vegas. No one ever doubted Herb's love for them. He was a generous man and an incredible role model to his family. He will be remembered for being honest and frank as well as kind and selfless. We all learned from his work ethic and service. That example led his children and grandchildren into service and business oriented careers. He lived with prostate cancer for many years and never complained. Being a spiritual man, Herb was never ashamed of his love for the Savior and read the scriptures daily, even in his last days. Herb was a special man and we miss him sorely. He is survived by his daughters Denise Reffitt and Nancy (Chris) Clements, grandchildren Deirdre Fife, Sean Fife (Jill Johnson), and Patrick Fife, and great-granddaughter Olivia Fife. He is preceded in death by his wife, Carole Raye (Schnautz) and son Richard Kelly Burdette. Herb was not one to want people to make a fuss over his passing and in order to respect his distinct wishes, we will not have an open memorial service. We will celebrate his life as a family and appreciate the support we have received by many. Arrangements entrusted to SCHOEDINGER FUNERAL & CREMATION SERVICE - NORTHEAST.

On Sunday, October 11, 2020, Herbert Richard Burdette Jr, left this earth and returned home to his Heavenly Father. He was welcomed by many loved ones, including his father Herbert Sr, mother Katherine, sister Alma Lou, and son Kelly. Most importantly,... View Obituary & Service Information

The family of Herbert Burdette created this Life Tributes page to make it easy to share your memories.

Send flowers to the Burdette family.