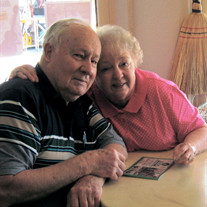 Henry G. Penner was born August 28, 1930 at Lushton, Nebraska and died 1/10/2021 at Centerburg, OH. He lived with his four brothers and parents on a farm near Lushton. Farming was difficult in the 1930's because farmers contended with drought, dust storms, and several years of grasshoppers destroying their crops. He vividly remembered his Dad's entire corn field being harvested into a one bushel basket, and the oats being too short to be cut with a binder. Henry attended eight years of country school at Darling District 20. He graduated from Henderson High School, Henderson, Nebraska, in 1948. Henry accepted the Lord Jesus Christ as his personal Savior at age 11 while being visited at his home by a visiting evangelist. While in High school he was baptized by Rev. A.H. Schultz, Pastor of his home church, the Evangelical Mennonite Brethren Church in Henderson, Nebraska, of which he was a member. After high school he attended Grace Bible Institute in Omaha, Nebraska for 1 ½ years. From 1953 to 1955 he was in Voluntary Service under Mennonite Central Committee at Maine Medical Center in Portland, Maine working as an operating room technician. There he met Betty Lewis, a student nurse. They were married July 12, 1957. After Betty graduated from nurse's training in September 1957, the newlyweds moved to Henderson, Nebraska where Henry farmed with his older brother Walter. Betty worked as a nurse at Henderson Hospital. Henry studied at home and completed an electronics technician course which took him to Columbus, Ohio to work at North American Aviation. He then worked from 1965 to 1992 at the Ohio State University Hospital in the neurosurgery division as a research assistant. After retiring in 1992 he enjoyed spending time with his children and grandchildren, especially the yearly vacations at Jekyll Island, Georgia. He also enjoyed his visit to his Son's family in England and France. Henry was a charter member of Berean Bible Church, Dublin, Ohio. He worked in AWANA, and served on both the Deacon and Elders Board. He is survived by son Michael and wife Chrisi Penner and children Anna, Caleb and Margaret, of Croton, OH; daughter Mindy Penner, Columbus, Ohio, foster children Jim Skaggs, Liberty Corners, NJ, Donna Wright, Huntington, WV, Tom Skaggs, Atlanta, Georgia and Robin Jenkins, Cartersville, GA;, Marvin and Sue Penner, Wolfe Point MT, Melvin and Anita Penner, Matsqui, B.C. Canada, and many nieces and nephews. He was preceded in death by his wife Betty, daughters Marilyn Brune and Mary Jane; his parents G.F. and Marie Wall Penner, and brother Arthur, brother Walter Penner and sister-in-law Elizabeth Penner. The family will be holding a memorial service for the immediate family. They wish to thank all of those who have reached out and cared for them during this time. Services entrusted to SCHOEDINGER NORTH. In lieu of flowers, the family has requested that donations may be sent to Fellowship Bible Chapel, 2949 County Rd 605, Sunbury, OH 43074 where they will be used for special missions projects.

Henry G. Penner was born August 28, 1930 at Lushton, Nebraska and died 1/10/2021 at Centerburg, OH. He lived with his four brothers and parents on a farm near Lushton. Farming was difficult in the 1930's because farmers contended with drought,... View Obituary & Service Information

The family of Henry Penner created this Life Tributes page to make it easy to share your memories.

Send flowers to the Penner family.