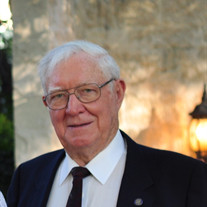 Harry Thomas Snow, Jr. (Tom) passed away Saturday, June 19th, 2021, at Riverside Hospital in Columbus, Ohio, surrounded by loving family. Born in Exeter, New Hampshire on May 13th, 1941, Harry graduated from Sanborn Seminary in 1959. Immediately following his graduation from Sanborn, Harry followed his dream by attending the United States Air Force Academy. He earned a Bachelor of Science degree in June of 1963 and was sworn in as a Second Lieutenant. He completed pilot training in Laredo, Texas on September 11, 1964, and was assigned as a C-130 Hercules pilot with the 317th Tactical Airlift Wing at Lockbourne Air Force Base in Columbus, Ohio. Harry served in the Vietnam War from 1967 to 1969 in the 374th Tactical Aircraft Wing at Naha AFB, Okinawa and the 315th Air Division at Tachikawa AFB, Japan. During that time, Harry was awarded two Air Medals for meritorious achievement while participating in aerial flight. He was also awarded The Distinguished Flying Cross for flying a classified night combat mission against unfriendly forces under extremely hazardous conditions and with great determination and superior airmanship, he flew through areas of intense hostile antiaircraft fire while providing flare illumination and successfully controlling friendly fighters to lucrative target areas. Though Harry separated from active service in 1970, his passion of aircraft and aircraft modification continued. He founded Air Cargo Enterprises in Honolulu, Hawaii, an inter-island cargo carrier which in 1978 and 1979 was the largest all commuter cargo airline in the United States. He later moved to Southern California where he formed Snow Aviation, Inc. and specialized in aircraft modification while focusing on the development of a DC-8 hush-kit. In 1988, Harry renamed the company Snow Aviation International, Inc. and moved the company to Columbus, Ohio, opening facilities at Rickenbacker Airport. The company began developing its own prototype transport aircraft, the SA-200 series. Later, the company turned to aircraft modification of numerous aircraft including the C-130 Hercules, C-141, Boeing 727, Cessna T-37, Douglas DC-10, and Embraer 120. Some of the notable modifications to older C-130 aircraft included a new "glass cockpit" with full modification of the avionics and the electrical system which led to the creation of the original AMP program. These modified aircraft have been used by NASA on special missions. SAI also modified C-130 aircraft for covert special missions by other branches of the military. The company employed numerous local aircraft industry personnel from the former North American Rockwell facility in Columbus, Ohio. Mr. Snow was also involved in founding Crestview Aerospace in Crestview, Florida. After meeting in Laredo, Texas, Harry married his best friend and love of his life Loretta (Laurie) Durden on September 18th, 1965. They were happily married for 55 years, raising a family of four children in Hawaii, California, and Ohio. He adored his family and was extremely proud of each of their accomplishments. Harry was an avid reader and held a fascination of history, engineering, mechanics, and technology. Though aviation was his lifelong passion, he also loved watching sports such as football and hockey. Preceded in death by his parents Harry T. Snow, Sr. and Dena Nason Snow, his sister Leah, son Keith, and grandson Ayden. Harry is survived by his loving wife of 55 years, Laurie Snow of Tampa, Florida. Also survived by three children: Scott (Monica), Brett, and Candice (Rocky) as well as seven grandchildren: Matthew, Timmy, Mitchell, Cheyenne, Ashlynn, Sienna, and Lucas; and three great-grandchildren, Annee, Asher, and Jay: nephew Rod Snyder; and extended family Jennifer Prentice and Kelly Brown. The family will receive friends on Sunday, June 27th, 2021, from 4:00PM to 6:00PM at SCHOEDINGER NORTHEAST FUNERAL HOME, 1051 E Johnston Road, Gahanna, OH. A Funeral Service will be held at 11:00AM on Monday, June 28th, 2021, at Peace Lutheran Church, 455 Clark State Road, Gahanna, OH. Interment will follow at Kingwood Memorial Park, 8230 Columbus Pike, Lewis Center, OH. For those that are unable to attend, the service on Monday will be live streamed at (link coming soon). In lieu of flowers, contributions may be sent to the American Heart Association (www.heart.org ) or the Wounded Warrior Project (www.woundedwarriorproject.org ).

The family of Harry T Snow Jr. created this Life Tributes page to make it easy to share your memories.

Send flowers to the Snow family.