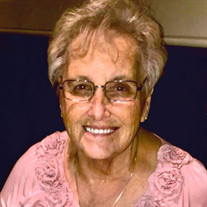 Harriet Marie (Buffam) Nettleship, 83, known as "Buff," passed away peacefully on Nov 11, 2021, in Westerville OH. Buff was born on Nov 18, 1937, in Portland OR to William and Bertha (King) Buffam. Buff spent her life in service of others, as a dedicated Registered Nurse, wife, mother, grandmother, and a community volunteer for multiple social support organizations. Buff met her husband, Harold (Hal) Raymond Nettleship, in 1959 while on a blind date. Buff's friend won a radio contest which included a date with a popular local radio disc jockey, "Hal Raymond." For safety, the friend invited Buff along for a double date. Hal and Buff hit it off and married four months later in January 1960. During their first 5 years of marriage, Buff followed Hal's radio jobs around the country from Portland to Seattle, Dallas, Minneapolis, and back to Portland. They had three children along the way (Kevin/Portland, Julie/Seattle, and Kari/Minneapolis). In 1973 they packed up again and followed Hal's career to York PA where they settled for the remainder of their careers. Buff worked close to three decades at Memorial Osteopathic Hospital and Hal hosted a morning show at WBSA radio. When Hal died of ALS in 2005, Buff moved to Dublin OH to be close to her daughters and grandchildren. Though she spent much of her life away from the Pacific Northwest, Buff was always an Oregon girl at heart. Buff was especially proud of her career as a RN, earning her degree at Good Samaritan Hospital/Portland State University in 1959. She found her true joy in life as a grandmother. Each November, the family would gather at the Nettleship home in York PA for Thanksgiving, enjoying holiday traditions such as the Hershey Park Christmas Candylane rides and holiday lights. She and Hal visited Ohio frequently to be present for special events and milestones in their grandchildren's lives. In addition to her dedication to her career, family, and community, Buff was an avid seamstress and hobbyist, well known for her creativity at every craft she worked, including tole painting, macrame, ceramics, and Creative Memories scrapbooking. She is preceded in death by her parents, her husband, Harold (Hal) Nettleship, and her son, Kevin Nettleship. She is survived by daughters Julie Van Schaik (Greg) of Columbus OH, and Kari Nettleship (Jon Wanamaker) of Dayton OH, and four grandchildren, Shannon Van Schaik (Josh Kime) of Columbus, Michelle Van Schaik (Jon Stegner) of Chicago, Jayne Van Schaik of Columbus, and Donald Wanamaker of Dayton. She leaves a brother, John Buffam, of Vancouver WA, as well as numerous cousins in Oregon and California. In honor of Buff, her family invites you to an open house on Sunday, Nov 21, 2-4 pm, at Schoedinger Dublin. Light refreshments will be served. In remembrance of Buff's life, in lieu flowers, please consider a donation to the ALS Association (donate.als.org).

Harriet Marie (Buffam) Nettleship, 83, known as "Buff," passed away peacefully on Nov 11, 2021, in Westerville OH. Buff was born on Nov 18, 1937, in Portland OR to William and Bertha (King) Buffam. Buff spent her life in service of others, as... View Obituary & Service Information

The family of Harriet Marie "Buff" Nettleship created this Life Tributes page to make it easy to share your memories.

Send flowers to the Nettleship family.