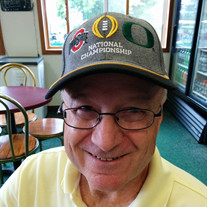 Harold L. Smith, age 78, moved on to that great golf course in the sky suddenly Saturday, March 20, 2021, at his home in Dublin, OH. Harold was born in Ravenswood, WV, on February 17, 1943, to the late Harold and Marie (Allen) Smith. Harold was a graduate of Ravenswood High School class of 1961 and of Morris Harvey College class of 1965, B.S., chemistry, which is now known as the University of Charleston. After college, Harold worked as an Editorial Scientist in the Registry department at Chemical Abstracts Service (CAS) in Columbus for 49+ years. He was well respected and enjoyed one of the longest tenures at CAS. Harold was a bowler (200 avg.) and a golfer (traveling with golfing buddies on their annual spring trip to the Carolinas). He hit a Hole-in-One on July 11, 1992, at Table Rock Golf Club in Centerburg, OH. He continued bowling and golfing with his CAS friends after his retirement. Years ago, he played on the CAS softball team, was a member of a CAS skiing group that traveled to Switzerland and a member of the CAS pool league. In Ravenswood, he was a member of Boy Scout Troop 44 and a drummer in the RHS marching band. Harold was the most humble, soft spoken and generous person one would ever want to meet. He will be deeply missed by his sisters, Sandy of Ravenswood and Patty of Columbus; adopted-sister Rose (Gary) Lawson of Ravenswood; niece Karyn (David Roederer) Stephens of Frankfort, KY; nephew Kevin (April) Lawson of Hurricane, WV; great-nieces and nephews Gage, Macy, Jarrett and Presley Stephens and Hadley and Parker Lawson; cousins and many friends. He was preceded in death by his dear friend Pat Davis Sparks. Family will receive friends from 11:00 am-1:00 pm on Saturday, April 3, at Roush Funeral Home, 205 S. Ritchie Ave., Ravenswood, where a memorial service will follow at 1:00, officiated by Rev. Don Maxson, with Rev. Tom Nolan assisting. The service will be livestreamed on Roush Funeral Home's Facebook page. Please observe Covid-19 precautions by wearing a mask. In lieu of flowers, memorial contributions may be made to N. Ravenswood United Methodist Church, P.O. Box 335, Ravenswood, WV 26164, St. Jude's or the Salvation Army. Visit www.schoedinger.com to share memories and condolences. Funeral arrangements entrusted to SCHOEDINGER NORTHWEST.

Harold L. Smith, age 78, moved on to that great golf course in the sky suddenly Saturday, March 20, 2021, at his home in Dublin, OH. Harold was born in Ravenswood, WV, on February 17, 1943, to the late Harold and Marie (Allen) Smith. Harold... View Obituary & Service Information

The family of Harold L. Smith created this Life Tributes page to make it easy to share your memories.