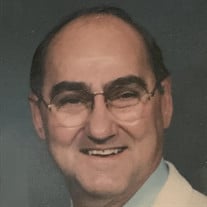 Harold Wayne McGee, 87, of Columbus peacefully passed away on December 15, 2021. He was born on October 11, 1934 in rural Muskingum County, Ohio, to the late David Virgil and Lizzie Anne McGee (Engle). Also preceded in death by brothers Wesley McGee, Floyd McGee, and Charles McGee and sisters Marie Moore, Eva Hastings, Cora McGee and Ruth McGee. He is survived by his wife of 64 years, Jane (Jinks) of Marne, son Jonathon (Amy Rohling) McGee of Upper Arlington, daughter Elizabeth (Douglas) Terrill of Stow, sisters Lois Mitchell and Mary Kent of Zanesville, grandchildren Wesley and Maria (Doty) Terrill, Rebecca Terrill, and Vivian C. McGee. Harold grew up on a dairy farm in Dresden and graduated from Jefferson High School, spent time at his beloved Ohio State living in the stadium dorm, and served his country in the Air Force and is a Korean Conflict veteran. Harold worked most of his career in the livestock industry focusing on feeder pigs. He was a 32nd degree Mason and member of Groveport Masonic Lodge. He also belonged to The American Legion, Post 198 and the Eastern Stars Findlay Chapter. Harold had served on the boards of the Findlay City Mission and the Kenton Neighborhood Opportunity Center. He and Jane were longtime, active members of the First United Methodist Church, Kenton, Ohio. Family and friends will gather at 1pm Monday, December 20th for a funeral service at Muskingum Presbyterian Church, 4545 Gorsuch Rd, Nashport, Ohio 43830, with time to visit the hour prior. Internment will take place in Muskingum Cemetery next to the church. Arrangements entrusted to SCHOEDINGER NORTH. In lieu of flowers, contributions in Harold's honor made be made to Groveport-Lockbourne Lodge #801, 5905 Saltzgaber Rd, Groveport, OH 43125

The family of Harold W. McGee created this Life Tributes page to make it easy to share your memories.

Harold Wayne McGee, 87, of Columbus peacefully passed away on...

Send flowers to the McGee family.